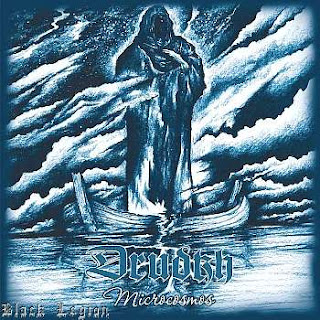 So, I know that Drudkh released a newer album this year. It's also not too bad, though it is receiving an onslaught of critique from nitpickers worldwide due to the band wishing to play something a tad bit different.
However, my wallet would only allot me one big treat this week at the record store, and, alongside scoring Enslaved's 'Eld' for five bucks, I picked this album up at random in its vinyl version. Being from last year, I figured it would still be fitting that I review it, seeing as anyone who would really be so butt-hurt about reading a review of a year-old album should probably just go read Rolling Stone instead.

So, anyway, here we have Drudkh's 'Microcosmos', picked up at random, with no clue what to expect of it. All I really know about Drudkh, really, is that their Slavic, morose persona was greatly manifest in their earlier albums, such as 'Autumn Aurora' and 'Blood In Our Wells'. Other than knowing that these gentlemen are from the Ukraine, and have had participation in bands such as Hate Forest and Astrofaes, there is much mystery surrounding this band.
However, immediately after spinning this album, one needs not know the details of the band itself, but, rather, the detail of awakening back from a hypnotic trance after a good forty minutes of a melancholic journey. The riffing? Spectacular. The eastern-European folk music starting and ending the album? Wonderful. The vocals? Cathartic. My mind? Blown.
As LPs usually go, much of the faster, blastbeat-ridden passages seem to be muddled down a bit, but much still permeates from the dirge of its production. The more mid-tempo, longing verses are as clear as night and day, and the entire atmosphere conveyed is one of longing and transcendence.
One thing that never seems to disappoint me about this band is how black metal they can sound, but how unique they also can be. This band does not care if guitar solos in black metal are cool or not, they do them anyway. They don't care if their scene is being overshadowed by their fellow European continents, they make what they make, and do a remarkable job at it.
Call me blasphemous, but I am convinced, after first listen, that this album will be joining 'Autumn Aurora' as a conjoined twin when I think of this band. Apart from the majesty that was that album, this release proves that, years later, the band can do something slightly different, yet have the same sound, and still define themselves. A feat that very little artists in this extremely elitist scene can do.
This album is everything that is correct about the modern black metal scene. No faux-Satanism, no theatrics, a wonderful atmosphere, no caring what people think of them but still not turning black n' roll, etc.

Standout tracks: 'Decadence' and 'Everything Unsaid Before'