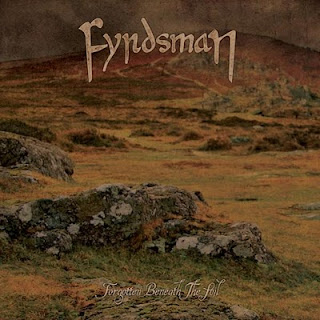 There has been a lot going on in the UK underground recently. Winterfylleth, Wodensthrone and Fen have taken the folk/black metal scene by storm and a slew of notable bands have cropped up all over the region. Enter Fyrdsman, a one man, melodic pagan black metal band founded by Tim Shaw (ex-Alestorm, briefly) and a force to be reckoned with.
I am a firm believer in not straining to make a “full length” or an “LP” if there just is not enough quality material readily at hand. EPs and MCDs are perfectly legitimate by my standards so long as they are well wrought and represent a complete work or idea. Fyrdsman’s debut EP Forgotten Beneath the Soil illustrates the validity of my stance perfectly: four tracks, three originals, one cover, and Twenty-some minutes of fitting, flowing concise work.
Epic keyboards and tight guitars over excellent sounding programmed drums characterize this self-produced recording in which the only conceivable downside might be the occasionally under-mixed vocal part. This issue (common in self produced music) does not detract from the experience in the least it simply makes the wonderful clean harmonies a bit tough to hear at times.
The opening title track starts appropriately with furious energy. One serious hook after another keeps this track exciting the whole way through. In the middle, the song breaks down into an almost shoegazey, densely layered interlude, reminiscent of the likes of Alcest, then breaks into a simple but very effective melodic guitar solo. In fact, Shaw’s tasteful guitar work is one of the delights of this recording that turns up again and again.
After the mighty opening title track concludes, the haunting “Demonised in a Disgraced Land” begins. This track seamlessly shifts from dark and brooding to contemplative and almost mystical throughout. Mid-paced and full of great melodies and instrumentation (the harp, for instance) this song brings me right to the lichen-covered rock depicted on the cover of the EP.
The last original track on the EP, the dreamy “Survival,” opens with calm synths and features more emotive guitar leads, shoegazey moments and rich voice harmonies. The dense atmosphere this song evokes is easy to get lost in, and the seven minutes are up in a heartbeat. Concluding the EP is a cover of “Natural Chaos” by Forefather, which I enjoy, even having never heard the band before. As it is a quick song, it fits perfectly onto the EP without stealing any thunder from the original material.
Forgotten Beneath the Soil is one of this year’s hidden gems. Fyrdsman flawlessly mixes epic and atmospheric metal into a concise debut record worthy to be labeled some of the best from the new English scene. The future looks promising! Hwæt!

Buy Forgotten Beneath the Soil
Posted by The Inarguable at 6:15 PM