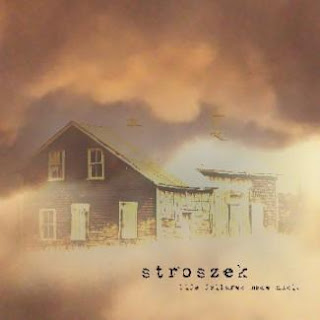 The seasons, they are a-changin'. The leaves are putting on their red, orange, brown and yellow sweaters for their long journey to the cold earth. Normally, I would say "Hey, looks like it's time to listen to some Tenhi!", but, after receiving an e-mail from the wonderful Claudio Alcara of Italy's Frostmoon Eclipse and Stroszek, and I might have a new autumn standard.

Life Failures Made Music is guitarist/vocalist Claudio Alcara's second full-length excursion into the music world as Stroszek, venturing deep into the world of depression and isolation. Hiding in the void between the realms of Alice in Chains's "Jar of Flies" and Agalloch's "Ashes Against the Grain" is Stroszek, utilizing the bleakest of guitar-led folk rock as a counterweight to soaring, shimmering climaxes. As I write this, I wonder how I could go about highlighting this release. What songs are better than others? What elements overshadow others? And it hits me. Why should I waste my time nitpicking the music and answering these questions about Stroszek when everything approaches perfection?


Life Failures highlights Alcara's talent as a master songwriter. Whether it be "The Unlucky Ones," "The Devil's Chair," "Undead Hotel," or any of the other masterpieces on this album, everything echoes depression and resignation all the same; Stroszek is honesty. Perhaps you can hear the truths in Alcara's voice, as he sings just beneath a whisper.

Deep and grey, Stroszek's brand of minimal folk rock/metal, at least for me, provokes the image of a man sitting by the fire in a cabin in the middle of the woods. Alone. Though he may be warm, no one will ever join him. He will run out of food if he doesn't venture out into the cold. He looks out the window and his breath condenses in a thin fog, leaving a whisper of freezing water on the glass. All the trees are bare. He accepts his fate and curls up in his blanket by the dimming fire.

Lost within the complexities of the human condition, Stroszek remains resigned.

Listen to this alone.

-Jon
Posted by The Inarguable at 5:25 PM