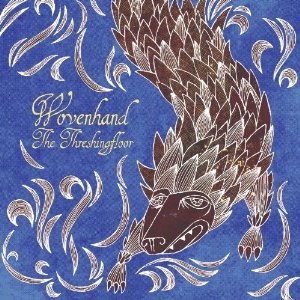 Trances of the hypnotic variety. That is what one can expect with Wovenhand. Some say that David Eugene Edwards (the mastermind behind it all) becomes possessed with otherworldly entities, perhaps disembodied and aching souls yearning for release from their earthly vessels. Such is the feeling one walks away with after experiencing the music of Wovenhand.

What started as a side project of Mr. Edwards during a lull in 16 Horsepower's creative output eventually became a full-time endeavor that continued to evolve, expand, and push the envelop more so than many had ever imagined. With The Threshingfloor, we have the latest offering from this auxiliary act, and along with it comes many new developments. The title itself is a reference to a flattened surface designed for threshing out the of seasonal grain for harvesting. Literal interpretations aside, one can glean biblical insinuation from this as well; times/places of worship being the metaphorical 'threshingfloors' for the worshippers, as He threshes our lives, separating chaff from grain, in the hope of gaining clarity.

The album starts off with a mood-setting piece entitled "Sinking Hands"echoing Edwards' filtered, distant sounding vocals. A slowly strummed rhythm underlies the constant hum and drumming of an almost ritualistic vibe. Following this apt intro, we are braced with the title track, which is of considerably higher tempo, and Indian influenced melodies. Such lyrical passages as "A place for the called for/ we call it the floor/ into the air/ in this time of threshing" bring the holy symbolism to life. Likewise, some of the other follow up tracks generally give off similar messages of either warning or eternal post-earth bliss in His kingdom.

The latter half of the album is of a similar vein as the former; "Singing Grass" has an undoubtedly dimmer and more serious tone. Seemingly yearning of cold yesterdays at the outset, this doleful track then proceeds to forewarn us of the darkness that creeps upon us: "Hear clanging of hoof and heel, on the black hill shown...The beast, he plays his harp, he does deceive the hearts, false fires in the minds of men". A cold and somber message, this piece is discernibly about how negative influences are all around us, of how evil's sway can affect any of us, whether we are aware or not.

The remainder of The Threshingfloor is accompanied by another group of select tracks--among them a cover of "Truth", originally composed by New Order. Edwards and Co. have an interesting take on the song, as he adds his folky flavor to it, along with his signature vocal style. The last few tunes on the album wrap it up nicely, and we see Wovenhand veering towards a more "world music" type of sound, becoming more experimental and well-rounded in their approach to songwriting. We are left off with the final song "Denver City", which is more upbeat and major sounding than anything else on the record, and a an overall positive note with which to end.

Highly recommended for your listening pleasure if you're a fan of 16 Horsepower, Jesus, and/or redemption. Or, simply a seeker of innovative, thought-provoking, and sincerely heartfelt music.

Thresh here.
Posted by The Inarguable at 1:10 AM