Interview with Herbrand Larsen and Ice Dale of Enslaved 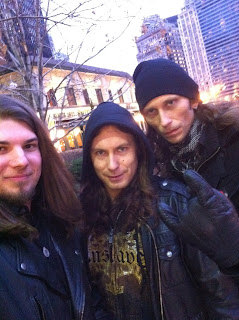 Eleven studio records into their career, Enslaved have yet again pushed the limits of what they can do with their new record, Axioma Ethica Odini. I was able to meet up with Herbrand Larsen, vocals and keyboards, and Ice Dale, lead guitar, before their performance in Chicago on their current 'Circle Above and Within' North American tour. Great guys, amazing performance, I highly recommend seeing Enslaved live as soon as you possibly can!


You can listen to the audio interview here:


Thank you very much to Herbrand Larsen and Ice Dale for their excellent input and fantastic performance.

Posted by The Inarguable at 8:35 PM