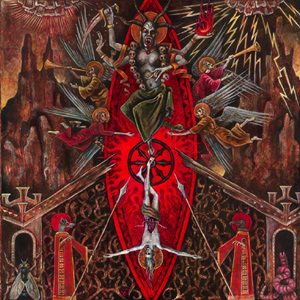 Weapon is a Canadian blackened death metal band. Formed in Calgary, the band now resides in Edmonton, Canada. The band is made up of Vetis Monarch (vocals and guitar), Apostle VIII (guitar), Kha Tumos (bass), and The Disciple (drums). The blackened death metal genre is a genre I should be following more than I do. The bands that I have heard have done an amazing job at combining these two extreme metal genres. Before hearing this album, I did not know who Weapon was. After hearing it, I am already craving for more!

From the Devil’s Tomb is a nine track epic. To start off, the album artwork is very well put together. The album artwork details something emerging from the tomb of the devil. In good, Satanic form, there are many images of horned beings, jagged brimstone precipices, and to top it all off, an upside image of Jesus Christ. Musically, each track captures the influences of black metal and death metal very well. For example, three tracks come to mind. 'LEFTHANDPATHYOGA' is a slow song; meant to be an intro to its following song The Inner Wolf. However, this track is very well written. It is not a sound clip and it is not less than 30 seconds long. It is a slow, chordal riff that is given a boost with a slow, powerful, simple drum beat behind it. The song builds with intricacy and complexity until it leads into The Inner Wolf.  Another song that really hooked me was the second song, entitled 'Vested in Surplice, and Violet Stole'. This song captures the bands black metal influences to the mark. Blast beats and tremolo picking are very prominent in this song. However, it strays far from stereotypical because of how catchy and intricate the riff is. Through and through, 'Vested in Surplice, and Violet Stole' is one of my favorite songs on the album. Lastly, 'Towards the Uncreated' is another song that really caught my attention. What makes this song special is its very accurate blending of both black metal and death metal. The song is 7:16 long and contains very well written black and death metal sections that are well dispersed throughout the song. My favorite part of this song is at marking 3:30. Up until this point, the band is playing a black metal riff. Suddenly, the riff changes to a slow, simple guitar riff with simple drumming. This section reminded me of many of my favorite classic death metal bands like Asphyx, Bolt Thrower, and Grave. For a blackened death metal, Weapon has done their listening and it is showcased quite well in the final track.

This album was a joy to listen to. As a fan of black metal and of death metal, the genre of blackened death metal is right up my alley. If you too are a fan of both of these extreme metal genres and are tired of the same old material, than your search ends with "From the Devil’s Tomb". Weapon is a band with great promise and amazing potential. I hope that this band gains the attention they deserve, as well as the success that they seek. Pick up a copy of this record through Ajna/Agonia Records and start head banging! \m/