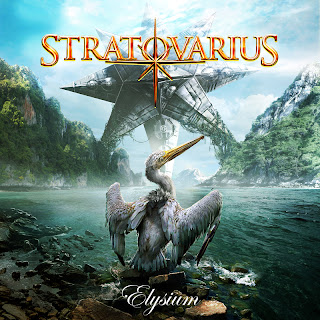 Stratovarius is one of those bands for which I was a real fanatic in high school. Looking back, of course, there were plenty of lame songs and silly aspects to the band, but when they hit the spot they really hit it. During the time of my fanaticism, Timo Tolkki (then the “mastermind” behind the band) had slowly been succumbing to some sort of mental disorder / massive ego trip and was releasing not-so-great music. Stratovarius was dismissed, then called back again with the promise that the music would sound like “Pantera with keyboards” and be fronted by someone named “Miss K.” Needless to say, it was a strange time. As I was growing out of the “shredder worship” stage of my life I began to care less and less about the band (I do wish I had bought that t-shirt that said “I eat metal and shit chains” with the cartoon elk doing just that on it, though). I tossed in the towel with Stratovarius following the self-titled travesty of 2005.
The respect I had for Tolkki has diminished, though he did provide a sort of “role-model” for me and he certainly does have some redeeming qualities. Today I am eager to say something I never thought I could allow myself even to think: Stratovarius is better off by far without him. 2009’s comeback Polaris was the beginning of a promising new era which I’ll admit I was not expecting and have little knowledge of to go by besides the singles. However, it was my great fortune to be given the opportunity to review 2011’s Elysium.
Comparisons abounded in the early years of the last decade between Stratovarius and Symphony X. These were entirely bogus and based on nothing but the fact that both bands had a similar lineup structure. They were also curiously prophetic because this new incarnation of Stratovarius (featuring only vocalist Timo Kotipelto, keyboard wizard Jens Johansson and drummer Jörg Michael of the classic lineup) does sound a bit more like Symphony X in the heavy / riffy department. The pseudo-80’s rock vibe is still apparent on the new release but the compositions are more varied and heavy than in the past. Elysium is also melodic in an almost symphonic way without relying much on symphonic instrumentation.
Since the departure of Tolkki, Stratovarius seems to have become free to apply their skills to writing songs rather than showing off. The album opens with “Darkest Hours” a fantastic sing-along power metal tune relying more on groove and melody than speed and showboating. The beauty of this song is that it is representative of the rest of the material. The attention given to this well crafted opener is obvious in the majority of the rest of the tracks. The elements of hugeness and depth are all presented here and are thankfully never scrapped.
“Under Flaming Skies” follows suit with excellent use of melodic bells and a catchy but inspired sounding chorus. Here the use of the dreaded “Night / Light” rhyme is overshadowed by the tasteful and effective guitar solo provided by Matias Kupiainen. “Infernal Maze” begins sounding like it’s going to be a lame ballad but it takes on a nostalgic “Black Diamond” caste before long. It is not a bad song, but not quite on par with the fresh and inspired sound of the previous tracks, unfortunately. At least it proves that Jörg Michael is not the “drum machine” I once read him referred to as. Again, the huge, epic solo part saves this song half way through from being run-of-the-mill. Fortunately the ballad “Fairness Justified” is not entirely boring and features another well crafted chorus to lift it up above the mundane.
Doing a track-by-track of Elysium would be pointless because not every song is on par with the others. In all, it is a promising album, not perfect, but featuring a lot of interesting and memorable moments. Stratovarius does a decent job mixing the pseudo-hair metal traits with the more interesting progressive / power ones and Kotipelto’s sometimes overbearing voice is generally restrained to a range that makes more sense for him. Jens uses a more varied synth palette than is usually expected and deviates from the typical saws and leads (though these are still in pleasing abundance), and the songs all seem to have been conceived with more concentration than in the past. Elysium, is definitely worth a listen for anyone already into this style of music and even those who did not much care for Stratovarius in the past. This new era is interesting enough to warrant a second listen.

-Bryan A. Wysopal
Posted by The Inarguable at 10:18 PM