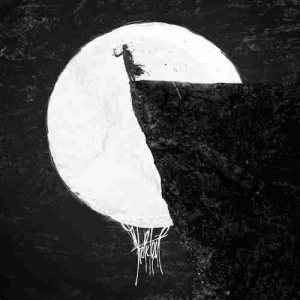 Hailing from the south of Germany, Heretoir represents something a bit different when it comes to the darker styles of metal music. Entirely the work of mainman Eklatanz, the music is focused primarily on the dreary, listless, and sort of drawn out blackened post-rock that has now become quite popular. And for good reason, I might add. Having released an independent demo (Existenz) in 2008, followed by a re-release of it in the form of an EP with Pest Productions the next year (.Existenz.), Eklatanz was beginning to make a name for himself. By 2010, he had completed a split with Thränenkind, on a work titled Wiedersehen - Unsere Hoffnung, also with Pest. The split was a solid release, and left many--myself included--excited for the upcoming self-titled full-length, Heretoir.

This time around, Eklatanz chose to go with Northern Silence Productions, a German-based label, as opposed to Pest (based in China). The first thing one will notice about Heretoir is the cover art - it is quite fitting and effective, given the style of music. Dark, lonely, but also a bit awe-inspiring. And designed by none other than Fursy Teyssier (Les Discrets, Amesoeurs, etc.). The album opens up with a short piece titled "The Escape: Part I", a short ambient/piano track which sets the mood for the rest of the songs. It sounds cold, bleak, and lost. Ideal for this sort of music. We are then blasted by the first heavy song, "Fatigue"; the guitars are fuzzy and gnarly, the drumming hypnotic, and the vocals wrenching. The riffs sound creepy at times, and just plain dejected at others. It is nice to hear some cleaner-sounding parts as well, as it only adds to the contrast. The next few songs are quite varied, however. With "Retreat to Hibernate", we are graced with many clean guitars and a more relaxing atmosphere. With "Weltschmerz", we are bombarded by hyper fast blast beats and joyless trem-picked guitar riffs. Post black-metal in all its dreary glory.

My favorite song on the album has to be "Graue Bauten" by far though. It starts off with a cold ambience, and then sinks into a brooding and tearing passage, where the slow drums and depressing riffs echo the overall message of isolation and melancholy, and how real it can be for some people. Towards the album's end, we come across Part II to the intro track, which wraps up the first half nicely, by means of clean guitars and spacey atmospheres. "To Follow the Sun" is another grand track, perhaps my second favorite after "Graue Bauten"; it sounds a lot like the kind of post-black metal with acts such as Lantlôs. Very large feel and pulsating gloom throughout. The album ends with the song "Heretoir", another glum and perhaps nostalgic piece, that is reflective of the album as a whole, and certainly Eklatanz's current musical state of mind. The vocals are shriveling, and the atmosphere is quite chilled.

If post-black metal is your kind of sub-genre, then I would highly recommend Heretoir. I think anyone would be able to find something alleviating about Heretoir, regardless of their musical tastes, but people who dig the dreary stuff will totally love it. Also, there's no doubt that this song (and entire album) will be a refuge for seekers of solace amongst the sequestered life. For more information on Eklatanz and Heretoir, seek here. To purchase Heretoir in either digipack or vinyl form, follow this path. Alles ist grau.

-Shane
Posted by The Inarguable at 8:01 PM