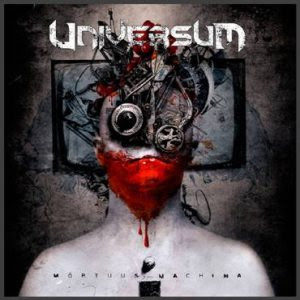 With this being the second offering from Universum featuring guest work from: Christian Älvestam, Marios Liopoulos, Olof Morck, Ola Frenning, Tommy Tuovinen, Paul Wardingham. It is a better album then their first work.

The guitar work is your basic melodic death metal along the lines of Soilwork, Dark Tranquillity, ect ect but never the less with some original idea thrown in here and there. But never the less there are plenty of good groovy riffs in there that are enjoyable ! The Keyboards you almost can not hear them in the mix I mean they are there but they are like a silent atmosphere effect like of that which Soilwork and some others do which is sad because I think they should have just as much as a open part as a guitar solo ! The bass is pretty tight. The drums are impressive because they are not triggered all to hell which is not a bad thing that does fit some music. The vocals on this record are greatly improved being with the first album which was way into the hardcore style. Here they are more guttural and at some parts will remind one of Johan Axelsson the ex singer of Arch Enemy.

Christian Älvestam brings his signature vocal melodies and vocal tone as a guest on this album and he does a damn good job ! My only complaint is that his vocals on this album have to much of a recording booth reverb in the mix it is something you must hear for yourself and judge. As for Marios Liopoulos, Olof Morck, Ola Frenning, Tommy Tuovinen, Paul Wardingham their solos are amazing Universum chose well in picking their guests for this album.

This was a much better album then their first effort Give this album a try you might like it.