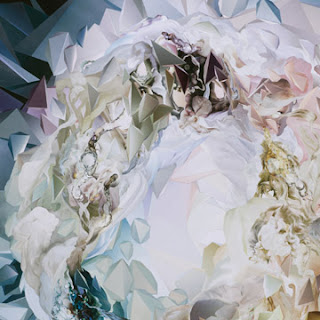 Not long ago I encountered an expectedly brilliant album. I thought Mamiffer would be yet another sludgy post metal band and didn’t have much in the way of optimism for Mare Decendrii. As it turns out, Faith Coloccia and company are collectively “the man,” and that album is top tier (and not at all just sludgy post metal). Needless to say, I am quite the fan and will jump at any chance to write about anything by Mamiffer. Fortunately for me, Utech Records sent a split with House of Low Culture Inarguable-wards which landed in my hands. So not only do I get to hear and write about more Mamiffer, I get a new band too!

Beginning with Mamiffer’s “Uncrossing,” my first impression is that it is a bit more stripped down in comparison to the recent full length. This is younger Faith being represented here (the recording is apparently from 2008, at least in part) so that is not at all surprising. The music, comprised of piano, organ, synth, percussion (timpani?) and a variety of field recordings and other elements, divides fairly easily into two parts. The first part is where we get the melody and the hook—one of the great strengths of Mamiffer is that embracing of the hook. Faith plays a beautiful piano with all the levels the instrument can speak at answering to the command of her fingertips, and she knows just what melodic buttons to push to get it to register in the gut.

Not long into “Uncrossing” the steady pulse of the echoing percussion carries the music into a zone of floating harmony. Organ and field recordings take over and accompany the pulse through six or seven more minutes of shimmery texture and that pulse ultimately takes the song away.

I have less background with House of Low Culture (this is my introduction to them), but their track has some good things going for it as well. “Ice Mole” is a bit less on the structured side in comparison to “Uncrossing.” More layered and full of voices (literally at times), it contains a great number of distinct changes to focus on. It really functions more as a soundscape or a mood piece.

The various textures used are what drive “Ice Mole.” Harmonious and distant voices appear in the beginning and give way to a painting of sound that rises and falls, incorporating guitars, pianos, feedback and all sorts of fun things. The sound aptly resembles the cover art (a nice piece by Are Mokkelbost) and even calls to mind a little of old Tangerine Dream (think Rubycon or Phaedra) but with more in the way of ordered melody.

House of Low Culture’s track can drag a bit, especially when taken in just after getting through Mamiffer’s more—for lack of a better word—“accessible” track. Twenty minutes of meandering sound can require a bit of attention not always readily available. It has its strengths, though, and should be given a chance, perhaps skipped to and taken in on its own.

Overall, this two track split is a nice example of what both Mamiffer and House of low Culture can do. It is well produced and comes in a nice package with pretty artwork. I might be more partial to the Mamiffer track, but both pieces are different enough to stand on their own and yet still compliment one another. In an age when the split is something people seem to be doing just because, this one actually feels like a standalone work.

Check out the purchasing info on the Utech Records releases page.

-Bryan A. Wysopal
Posted by The Inarguable at 5:47 PM