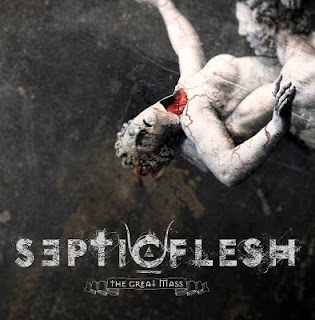 I like to think of myself as something of a connoisseur of symphonic metal. I make symphonic/orchestral music and I listen to tons of it, metal or otherwise. I do not claim to have any extensive schooling or fancy degree to give my opinion any weight, but I think a lifetime of exposure lends me some legitimacy. I know what sounds like garbage and what doesn’t, and when I was first introduced to Septicflesh through 2008’s Communion I knew right away that there was something special going on with this band.

When people think of progressive symphonic metal with occult or mythological themes they tend to think of Therion. The bands are similar in concept and structure; both are a mixture of gothic, black and death metal and both utilize orchestras and a plethora of different vocal styles (and vocalists). Both bands have a similar “heavy rocking with operatic singing over it” sound at times; and the clean lead vocals on the new Septicflesh sound uncannily like Snowy Shaw. The difference, though, is that Therion tends to get boring at times. Not that I don’t enjoy them, but too often the music is nothing but unisons even though and entire orchestra and choir is at their disposal. I tend to be left expecting something more from a Therion album, much as I might enjoy it; the idea is there, but the result is lacking. Septicflesh tends to produce an album that expands and breathes and they have most certainly done that here with The Great Mass.

Septicflesh makes use of everything they can get the Prague Philharmonic to do. The orchestrations are perfect for their style. It’s not the kind of orchestrating that would be expected from Bal-Sagoth or Turisas and the like—a style which is excellent, of course—but something more textural and more expressive of the actual live instruments. The music calls for more separation, a more impressionistic approach that is actually less saturated than it ends up sounding. For all their claims that they are different from the typical “film score” type of symphonic metal band, there are a lot of wonderful melodic and cinematic parts on The Great Mass.

The dynamics of this album, the balance of a lone female voice with the crush of low register death metal and an orchestra that sounds at times like the first breaths of a long-dead, reawakened behemoth and the growing tension of a creepy dream at others, are so deftly handled as to make it feel like something looming up over the trees. It’s the impression I get when listening to The Great Mass, and which helps to differentiate Septicflesh’s symphonic metal from that of their peers, that it sounds absolutely monstrous. It’s not that the music is always scary or that it is simply dark; there is just something of the sublime in it. As the treetops start to bend toward you and the thing that is this album comes into view it is pure exhilaration. Yes, it can probably kill you if you don’t get out of the way; but for that moment the sun is blotted out, you are feeling something stirring positive emotions within you, like standing outside admiring the beauty of an approaching lightning storm.

A fine mixture of melodic gothic metal and orchestrated death metal married to dark themes of occultism and mythology, The Great Mass promises to be one of the glowing gems of a year marked mostly by half-way offerings. The unquestionable strength of the single (and opening track), “The Vampire from Nazareth,” is a good indicator of what to expect.  “The Undead Keep Dreaming” is one of the more legitimately creepy metal songs I’ve heard in a while; but choosing highlights in this case is pointless. Each track is unique, well crafted, and fitted to its proper place in the frightful ceremony. Behold these mad architects of dark metal!

Posted by The Inarguable at 9:54 PM