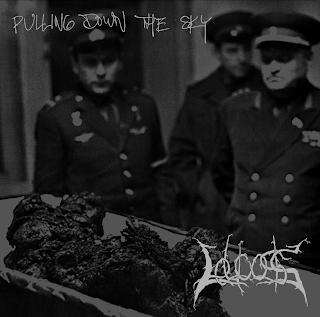 This stirring album cover is by far one of the most poignant and heartbreaking photos I've ever seen. The story of Cosmonaut Vladimir Komarov, whose immensely disfigured remains make up the charred mass in the lower left-hand corner, is one of betrayal, fear, and...space. Komarov was one of the first Cosmonauts in space, in the time of famed Cosmonaut Yuri Gagarin, and in a freak (?) calculation accident his space capsule. hurtled through the atmosphere, his body and the mechanics of the ship melting and merging into the mass of organic matter and metal you see before you. Click here for NPR's in-depth report on Komarov's death and the Soyuz Capsule incident, as well as a haunting recording of Komarov's final, utterly helpless moments, screaming "You've killed me!"

"Tracked live, mixed & mastered by Leucosis under Japan's poison rain at Firecracker Studios, Santa Cruz, CA" reads the liner notes for West coast black metal trio Leucosis's first full-length "Pulling Down the Sky," an hour-long adventure into deep space, the certainty of death, and the story of Vladimir Komarov, whose terrified screams can be heard in the second track "Approaching Lucidity."

"West coast black metal? All that stuff sounds the same," you might say, and, in some cases, yes, Leucosis does fit into the Weakling-eque post-2000s West coast scene, and yet there is something entirely different about their execution. Take, for example, the aforementioned "Approaching Lucidity," which completely oozes doom and almost Tribes of Neurot-like tribal psychedelia. These 8 songs (3 of which are ambient interludes which are all under 2 minutes long) meander between crushing doom metal ("crushing" really is the only word I've found that can accurately depict non-groovy doom metal - we journalists need to find a new word), spacey psychedelia, and passionate, not-too melodic black metal, sometimes taking on an almost Deathspell Omega-like atonal/melodic dichotomy.

So, Leucosis might not be the most original band to come from the West coast, but if you want a good, memorable black metal band that strays from the whole "forest" and "paganism" nonsense with which everyone seems to be obsessed, I highly recommend that you check out Leucosis. "Pulling Down the Sky" is full of raw passion that a lot of black metal bands really seem to lack nowadays, rather trying to emulate the flavor of the week. If you've got $5 to spare, definitely look into ordering this one, and maybe check to see if they have any copies left of their "Movements to Breathe" EP, from Leucosis at leucosis.band@gmail.com.

PS) Sorry about my lack of presence here. If you don't check the Facebook page, I'm completely swamped with schoolwork, but I'll be free soon!
Posted by The Inarguable at 12:01 AM