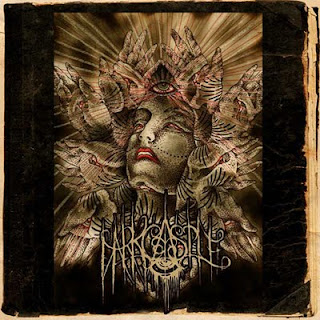 St. Augustine-based duo Dark Castle has already shown that they can make high quality psychedelic tinged doom metal tunes without a problem.  2009’s “Spirited Migration” was an excellent debut for this bassless band that showcased their sense of songwriting and showed how easy it was for them to get the reverb going at a ridiculous number of wobbles per minute.  Their second LP “Surrender To All Life Beyond Form” follows this game plan at the core, staying true to the old axiom “if it ain’t broke, don’t fix it.”  However, the end result of their sophomoric effort isn’t quite as successful, even as it continues to be simultaneously catchy and listenable.  Why might this be?

It’s important to note the overall motif of the album, which involves making the listener feel as sad, gloomy and helpless as possible.  Is this effective?  We have the title track, which succeeds with its creepy evocation of a midnight train ride on a journey to nowhere before the chilling vocals and sausage stringed riffs barge in.  Then there’s passable yet uninspiring like “Stare Into Absence,” which sounds like a tune anyone familiar with Dark Castle could have generated.  And then there’s interludes like “Create An Impluse,” which comes off as a clone of the title track from “Spirited Migration” yet tries to make follow the aforementioned motif with…thunderstorms in the background.  Ambient noise does not automatically induce despair.  Yet hope for the album is fully present in “Seeing Through Time,” which is as close as this album gets to dripping acid over virgin ears.  Then just when it seems like the best is yet to come, the album makes a wrong turn.

The interlude “Spirit Ritual” continues the by now predictable “We’re going to creep the fuck out of you and make you smell our weed” vibe, and though it proves an acceptable if unremarkable track, it doesn’t fit around the other tracks surrounding it at all.  On the contrary, it proves jarring for the wrong reasons and breaks the portcullis of fear the band cultivated during the previous five tracks.  “To Hide Is To Die” follows and though it’s one of my personal favorite tracks off this, it bring up images of  grimy Super Nintendo games from the early 90s, where blood and gore was limited to red pixel sprinkles emerging at acute angles (Thanks, Mortal Kombat).  This too didn’t seem to fit the previously established mood either.  The last two tracks “I Hear Wind” and “Learning To Unlearn”….well, the former has a catchy guitar hook and decent sound overall, but the latter has uncomfortably nigh molesting keys and riffage weighting in at five hundred pounds that sound awesome on paper, but isn’t executed as well as one would hope.

Had this album been more coherent with a smoother flow and less sounds generated at the roll of a 20-sided die, then this might well have ended up even better than their excellent debut.  Alas, “Surrender To All Life Beyond Form” instead sits in a peculiar purgatory.  It’s not terrible at all, and it’s still a worthy addition to the Dark Castle discography. But despite this fact, I couldn’t help but sense all the potential this album had, and how it could have – and should have – been so much more.  Then again, maybe this was the point of the album in the first place.  I sure hope that’s not the case, but nonetheless, this is worth at least a spin or two.

The album can be bought directly from respectable establishment Profound Lore here.

-Shane D
Posted by The Inarguable at 1:05 PM