Forest of the Soul - "Restless In Flight" (2011) [Bindrune Recordings] 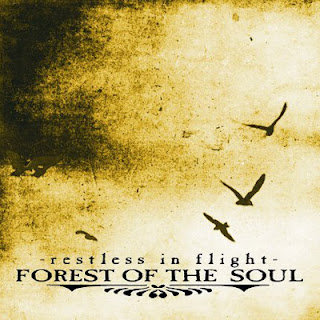 From my first listen of Nechochwen's "Algonkian Mythos" back in 2008, Aaron Carey has always been one of my favorite guitarists. This did not change upon hearing his collaborations with American black metal band Harvist, his older band October Rust, or his second, more metallic Nechochwen album "Azimuths to the Otherworld." Carey's deep, contemplative folk guitar compositions demonstrate an intense understanding of not only his Appalachian surroundings, but also classical guitar styles, Sufi (Whirling Dervishes) classical music, and what I can only assume to be Native American music. As a complete fanatic of darker, American-styled folk music, I completely ate up Carey's style, so when I heard that he was releasing a new album with bandmate Andrew Della Cagna titled Restless in Flight, I was, needless to say, excited. When I noticed that this was Forest of the Soul's third release together, I realized I might have been behind the times a bit...

Upon listening to Forest of the Soul, I must say I was surprised. Though this is a folk album, it was definitely something different. Immediately I detect a Jar of Flies-era Alice in Chains influence, both vocally (the droning vocal harmonies remind me so much of Layne and Jerry; it's almost uncanny) and in execution, as Aaron and Andrew utilize a full drum kit, making for more of a rock sort of atmosphere. I know a bunch of you are going to read this and think "Grunge? Well that's overdone and lame," and, sure, grunge is one of those things the little hip kids latch onto due to its "vintage" qualities. I, for one, welcome this grunge influence in the metal and folk community; it's a different range of emotion than what is already explored and, I mean, it's not like there are a bajillion bands doing it (because they're too busy gazing at their shoes or something).

Of course, Restless in Flight isn't just a folky grunge album like one would hear on a Days of the New album. No, there are also some amazingly beautiful instrumental guitar duets that remind me of the Candy Rat Records roster. For those of you who haven't heard of Candy Rat Records, think of sort of happy, bittersweet, "back home"-y kind of sounding guitar works. Again, something that is fairly popular in its own circles, but something you don't hear on an album quite like this. Carey's technical but tasteful guitar work is reminiscent of guitarists like, say, Don Ross or Michael Hedges; thick, open harmonies and interesting textures that sound as if he's playing at least 3 guitars, yet it is just one man creating such picturesque music. I am certainly glad to see more artists adopting this otherwise unknown style as an influence for composition.

Yet another face of Restless in Flight is the progressive, more Damnation-era Opeth influence, dealing with more complex structures and chord progression-heavy songwriting rather than the standard folky 3-chord vamp to which people have become so accustomed. Though the whole "Opethcore" genre is overdone, not many bands have tried to recreate or appropriate their softer, more mellow side, which often goes unappreciated for being "boring." This addition is surprisingly a nice touch and works well combined with the other two outside sources of influence.

So what do these three influences, combined with Carey's pre-set Appalachian folk style, give us? A decent album, I guess. I mean, I do like it, seeing as both Carey and Della Cagna are brilliant musicians, but I can't say that I enjoy it as much as Carey's previous endeavors. I know, I know, I sound like some old fuddy-duddy saying, "I remember, back in the day...", but I can't really say that I enjoyed this album as much as Algonkian Mythos or Azimuths to the Otherworld. Sometimes, like in "Desert Rose," the album gets a little too melodramatic for my taste, or at others, like in "Evenfall," the vocal melodies might come a little too close to an Opeth melody (sorry, guys - I know it was unintentional). Again, don't get me wrong; I do enjoy the album and find myself hearing little snippets of each song in my head here and there, but it didn't truly live up to my lofty expectations for Aaron Carey. The best aspect to this album, at least in my opinion, is the presenting of genres that might otherwise go unknown to FotS's fanbase; I've noticed that a lot of people refer to this as "unclassifiable" music, when in reality they just haven't really stepped out of their safety zone just yet, rather waiting for a familiar musician to show it to them. Hopefully this album will be what is necessary to bust an ignorant metalhead's comfort bubble and show them some cool music, which I can definitely appreciate.

-Jon
Posted by The Inarguable at 2:13 AM