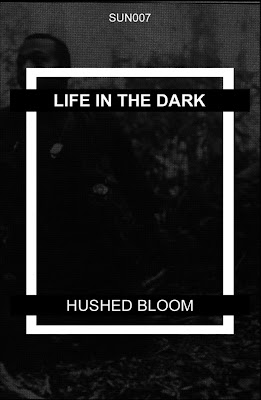 Life in the Dark. Those of you who follow my posts might recognize this band name, the solo project of Z. Zsigo of Maths and Livimorket, from the honorable mentions addendum of my top releases of 2010. Since the late-summer release of the The Sunya is Rising album, Life in the Dark has released another demo, The Limbs in Gloom (which was released as part of a 2CD on Music Ruins Lives), and took part in a 5-way split with Gholas, among other bands. While still retaining its ethereal, pensive, synth-driven core sound, Life in the Dark has seemingly abandoned the heavier, doom metal-like sound for something more distant and thoughtful; more fitting for Zsigo's self-described "slowcore influenced drone."

To say it blatantly, Hushed Bloom, Life in the Dark's most recent output, is about death. Not some violent, explosive death, but something more quiet and passing, like a candle that slowly, but surely, burns out. These two lengthy tracks (each crossing the 15-minute mark), titled "Hushed Bloom" and "Comadeth," feature a much more low-key, highly minimalist side of Life in the Dark that, while hinted at in the past, has fully realized itself on this release. Solely featuring lush, distorted synthesizers, maybe reminiscent of Scott Cortez's guitar work with Lovesliescrushing, a drum machine, and Zsigo's own voice, Hushed Bloom is an adventure into the disembodied feeling of dying, like, as stated in the title of the second track, one might feel when in a coma. It is warm, there is no pain, only the distant feeling of leaving. As our friend Harold from Hammer Smashed Sound so wisely put it, "this is a sublime, ethereal, and enchanting way to die."


This wonderful cassette is limited to only 25 copies and, while I can't afford a copy (SADFACE), all you fine folks should send Z. Zsigo your money via the Sunyata Records webstore.

Email ThisBlogThis!Share to TwitterShare to FacebookShare to Pinterest
Labels: 2011, Drone, Jon, Life in the Dark, Review