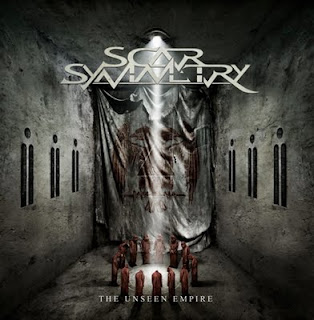 Scar Symmetry seems to be pushing out albums every other year and maybe that is a good thing but it can also be a bad thing. The band released a preview of the album by releasing the song Illuminoid Dream Sequence a month before the albums release and I was pretty happy with what I heard in the song. Progressive Death Metal with killer melodies and fantastic song structures ! I thought it was going to be a ground breaking album like Holographic Universe was for them but well it was not like at all. I was a fan of Dark Matter Dimensions and I think there could have been more time spent on creativity on that album it very much did have its own style and sound to it then the last 3 albums much like this new album The Unseen Empire but more or less. The opening track to The Unseen Empire is The Anomaly I was kind of like huh ? Upon hearing this song for the first time because with each Scar Symmetry album it seems like they have always had great ideas for opening the album of there albums but this one is like a mix of hard rock and just Metal with some death metal vocals in it here and there. It took me a few listens to that song to like it..

About half of the album just seems like not much time was really put into thought and trying to getting all of the ideas out clear enough more like generic ideas really. The album is about topics on the N.W.O. (New World Order) not the wresting N.W.O. But the Conspiracy Theory as much of their albums are which I see and have found evidence to believe that it is true. This album deals with the Global Elite on what they do to humanity, how they do horrible things to humanity, use fear to control the population, and so forth. I fear as though these guys are running out of ideas for songs and well they have put out a new album every other year so.. The main clean singer Lars his vocal melodies are not has pitchshifted and power metal to fuck on this album as well and Roberth his death grunts are just brutal as ever. But as I have said this album is really just some hard rock with Metal and death grunts thrown into it I did like the first 7 tracks but the last 2 I do not like as much. So give it a shot for your self give it a listen. I really hope the next effort is much better.