I'm probably not the only one coming into this release experienciencing High Aura'd for the first time. For everyone else on a similar path, perhaps the phrases "toured with Barn Owl not so long ago" and "just released this split with André Foisy of Locrian" will shed a little light. 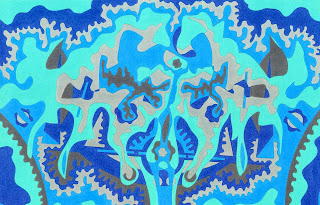 John Kolodij of High Aura'd plays guitar in a way that glorifies the instrument. Not in the sense of putting the instrument first; he lets the guitar become something glorious. His track on this split, "Dusk Latitudes," is a duality between tension and release at a timbral level. For the first ten glorious minutes, Kolodij lets an Earth-like western wandering bird slip out of his hands as soon as he calls the plains to run beneath it.

Growing from a cicada hum, a gritty half-ugly spool of glass stretches out in the east. The guitar turns into a soft wave of tonal beauty that builds just to the point of letting the crystalline grit turn us around and demand that we do it all over again. And then André comes in.

André does something strongly in the spirit of the works Locrian created before turning to black metal. Everything is in layers of soft strong flowing beauty, building and eventually falling through peace and climax into a moment when André seems to look back with regret. His anticipations never quite find resolution, and his screams at the end tell of the sort of self-hating dismissal that comes so potently after complete surrender to beauty.

Want to travel the spirit of the continent as a bird? Here you are.