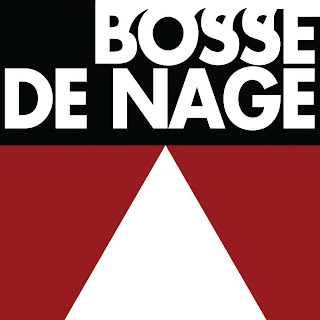 I mean, think about it - a genre based upon the ideals and ramblings of a group of sociopathic, violent teenagers scattered throughout the late '80s and early '90s. This is a genre of music that, for the most part, is centered around the celebration of wrongdoings and closed-mindedness and whose listeners, myself included, ridicule bands who attempt at this music because they aren't black metal enough. I'm sure this little notion is going to piss people off, but think about it. We've long known and accepted these things and we still love black metal. We're a little fucked up, but that's okay. Music is music and ideology doesn't necessarily have to be a reflection of the listener, but there will always be that lingering presence in the background of "Yeah, this album is a culmination of decades of violence and xenophobia. I'm a strange person for enjoying this the way I do."

Embracing the eccentricity of this confused and widely spread genre is California's anonymous sons Bosse-de-Nage. Having lived in relative obscurity for nearly half a decade, with two demos out on Aesop Dekker's Funeral Agency tape label, Bosse-de-Nage was finally brought into the spotlight with their mammoth self-titled album, which was actually recorded in 2007, released last year on Flenser Records. While their releases reflect the West Coast black metal scene as far as execution, the band's "affinity for the bizarre," what with strange, howling vocals and "de Sade-ian" (would that be sadistic? I guess that wouldn't get my point across as clearly) tales of a Marie pissing upon a Count or an anachronistic rant concerning Vincent van Gogh cooking his hand, sets them apart from the rest of their "scene," as it were.

With their second album, the aptly titled ii, featuring a beautiful Italian-styled minimalist cover, Bosse-de-Nage draws upon their peculiar brand of "Baudelairian" atmospheric black metal and presents five of the most intriguing black metal tunes of 2011. While still retaining their "minimalist" qualities present in previous releases, ii shows Bosse-de-Nage experimenting more with harmonic density; seeing how much only two guitar tracks can do, creating a dense, massive sound that wasn't so present on their last album. While obvious comparisons can be made to other recent California black metal bands, ii features occasional periods of spidery, awkward harmonies, echoing the early 1990s St. Louis post-rock scene where bands like Slint set the stage for damn near every post-rock band ever. No, you won't hear shimmering, reverbed-to-hell guitar leads, rather harmonically interesting, emotive, crisp guitar interacting rhythmically with the bass and drums. ii also marks the return of the sadistic character Marie, whose name was plastered all over Bosse-de-Nage's previous album, this time...oh I'll let the lyrics tell you:

A gentleman offers Marie his hat. She shits in the hat and wears it for three days.
-Bosse-de-Nage - "Marie in a Cage" (and that's one of the more tame lines of the song)

Just now you're probably thinking, "Wait, so you've mentioned Marquis de Sade, Charles Baudelaire, Italian-styled miniamlism, and Slint in a black metal review? I call hipster bullshit on this one!" and that is the plague of the American scene. It truly seems that any American black metal band who plays anything other than watered-down "war metal" will bear the mark of "hipster," and that is a shame. Yes, Bosse-de-Nage's more eccentric approach to black metal will appeal to the artsier side of the spectrum, but I can't see why your everyday black metal fan wouldn't like it, either. Strange and strong, Bosse-de-Nage's sophomore effort, ii, filled with cold riffs and intrigue, will be in heavy rotation for a good while.

ii will be available on CD and LP this coming September, but you can guarantee yourself a copy and pre-order it here at Flenser Records's webshop. Yet another addition to my "you need a job so you can buy things like this" list.

-Jon
Posted by The Inarguable at 2:53 AM