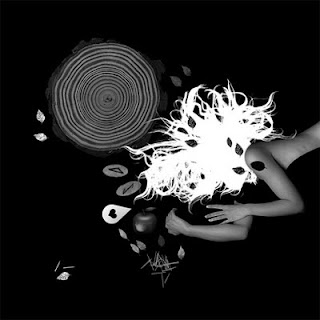 Demdike Stare members Miles Whittaker and Sean Canty share an obsession with witchcraft and all the bleak horrors found therein.  The band's very name references a famous witch that was part of the Pendle Hill  coven, who was tried and executed in 1612.   Incidentally, both are record collectors as well, one (Whittaker) by occupation, another (Canty) by obsession.  Demdike Stare brings together a passion for the past with the terrifying aspects of witchcraft and blasphemy.  To say that they live up to their name is an understatement.


“Tryptych” collects three previously released, vinyl only albums from the dark duo – “Forest of Evil,” “Liberation Through Hearing” and “Voices of Dust” – and places them into a triple album CD format with 40 minutes of added bonus material, featuring gorgeous black and white cover art by Adam Votel.  Despite their separate releases, all three manage to flow cohesively without a single missed beat.  On each of these LPs, Demdike Stare grabs hundreds of bits and pieces of music from an godly amount of old movie soundtracks spanning seemingly every genre and begins weaving them together as a tapestry.  With these, they create new songs from the corpses of the old, crafting them together into a Lovecraftian abomination from the depths of the psyche.

Every track on “Tryptych” plunges listeners into forsaken lands and dark rituals at campfires, slowly but surely dragging listeners to a point of no return.   The drone/techno/dub atmospherics can terrify, condemn, brings feelings of abandon, and spellbind the unwilling, sometimes all at once.  Notably, none of their music sounds consciously engineered - the high quality of production makes the tracks themselves pulsate with darkness, so that it feels not so much listening as experiencing.  This holds true in particular for “Liberation Through Hearing,” arguably the strongest of the trio, with the songs “Eurydice” and “Matilda’s Dream” as testament to the pagan movements the British duo have created with gentle hands and heretical hearts.

More than any other artist in recent memory, Demdike Stare has shaped an atmosphere for mythology, graveyards, urban blight, black forests and dusty roads alike.  “Tryptych” is a minimal masterwork devoted to the unsound and the unsettling, one that will unlikely be surpassed anytime soon.

Links to the three CDs, streaming in full @Soundcloud:

Forest of Evil
Liberation Through Hearing
Voices of Dust