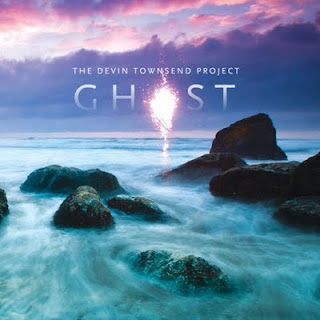 Devin Townsend is back at it once more and he now as much before brings us two new albums for 2011, namely Ghost and Deconstruction. These two new albums are very much in the same vein as previous albums Ki and Addicted. Ghost behaves much like Ki in the form of very laid back and ambient "chill out" music, if you will, and Deconstruction more like Addicted; very heavy and extreme while having all kinds of progressive elements.
I thought of writing a double review for both Ghost and Deconstruction, as they are companion pieces to each other, but I will save my Deconstruction review for a later date.
This album was pretty impressive. Not only do I like my Funeral doom, Black, Death, Doom, Progressive metal and other forms of extreme music but I do enjoy the more esoteric non-metal forms of music, namely progressive rock, ambient, Jazz fusion, new age music, and more. These genres, above all, emulate emotion, which is showcased in Ghost's ability to capture the childlike, nostalgic bittersweet that is wholly present in Devin Townsend's music and is representative of his own struggles with emotion.
Influence from progressive rock greats Mike Oldfield and Alan Holdsworth are highly prevalent throughout Ghost. Echoes of Oldfield's classic Tubular Bells surface in the form of soft, acoustic guitars and melancholic, folky melodies, while the Alan Holdsworth influences are much more in the progressive rock-tinged ambiance that he has claimed his own, but without the odd open chord structures. With those two influences, Devin blends in all kinds of "chill out," Zen, soothing, dreamy, flowing, electronics, acoustic music and new age types of styles. This is a very relaxing album; Townsend does do a good job of drawing upon his signature "wall of sound" style but in a more quiet, subdued manner, creating a monstrous, hour and 13 minute long album.
If you are expecting another metal album from the Devin Townsend camp, prepare to be shocked. Strict metalheads might want to stick to Deconstruction and pretend Ghost never happened but, if you need something to break away from metal for an hour or two, then this is your album. Sit back, drink some beer or something hard, and think. For the hardcore Devin Townsend fan this is a must have for you ! Because if you really do feel the way I do about this style of music then you will keep coming back to this album much like I have.
-Bjørn
Posted by The Inarguable at 12:36 AM