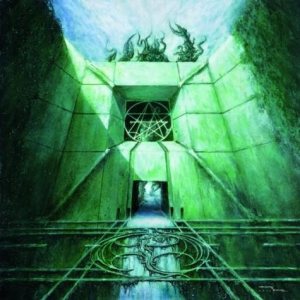 As a longtime fan of Texas based metallers Absu, it was with eager ears that I was sent their newest opus, aptly titled "Abzu". Although band leader Proscriptor McGovern describes the band as "Mythological Occult Metal", I can remember a time when Absu were one of very few bands that made me proud to be a fan of American black metal. Nowadays, you would be hard pressed to call Absu merely a "black metal" band. They have superseded the genre and have become so much more. Arguably, Absu has never been a straight up black metal band and have always had an especially obvious overtone of classic thrash. This mixed with the Celtic inspired folk passages weaved throughout, have given them quite a unique sound and regardless of the band having somewhat of a revolving door of musicians, Absu inevitably sounds like Absu and that is a testament to McGovern's musical genius.

As for the newest offering from Proscriptor and his hired guns, epic is the first word that comes to mind. This is a frenzied storm of righteous metal and superb musicianship. The band convincingly pulls off being both progressive and eclectic as well as aggressive and even brutal in its approach while the "folk" segments (though scarce and short), are beautifully done and compliment the ferocity perfectly and help guide the listener on an epic sonic journey set against the backdrop of Celtic mythology and H.P Lovecraft. Proscriptor has once again proved why he is one of the greatest drummers in extreme metal as well as one damn fine and versatile vocalist (Yes, the King Diamond like wails are in full force) and the riffs are just down right killer. The band still retains a healthy dose of straight up black metal which can be heard from time to time throughout the course of the album. The second track, "Circles of the Oath" is especially ridiculous in its intensity and is the definitive stand out track on what is a fantastic new chapter in the mythology of Absu. Although not as amazing as 2001 masterpiece "Tara", it is quite a bit better than the previous self titled album released in 2009. For fans of the band and of extreme metal in general, I cant possibly recommend this enough.

-Dallas
Posted by The Inarguable at 12:59 AM