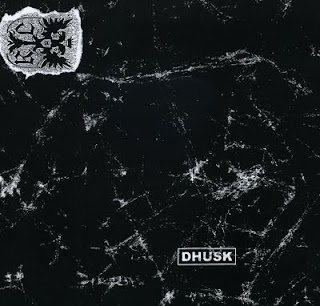 I committed rape while listening to this tape. It was perfect. My only regret was having to pause partway through (hold on, don't run away) to restart the tape.

Dhusk's untitled release on Paul Dever (Dhusk, Griz+zlor)'s Imperial.Noir label is, as seems common in the world of experimental tapes, two distinct sections. The first side churns away beautifully (Harsh Noise Wall, no dynamics, no change, no development) while a voice whispers away unintelligibly like a half-remembered conscience, the troubled dream of a total amnesiac (what is language? what is speech?) lying on the floor of a black cave.
The second side bursts full-fleshed into existence from the momentary hum of half-present signal. A tangible flow of churning, solid, noble death—always the same and always different. Pulses that don't form regularity, a subsuming, entrancing chaos of similitude. The hum and chatter of the tape finds body in this river of grating sound as stones, tempting you to drench your arms in their dryness and taste as they crush your bones and strip away scraps of your flesh.
Normally, the best reaction I have to a wall release is satisfaction when it's over. The Dhusk tape makes me go over and flip the tape again so I don't have to stop listening to it, and at one point I seriously considered learning how to set up  the tape as a loop so that it wouldn't stop. I am not kidding.
Paul is also offering a CD-R (limited) of the unabridged version of the second side at imperialnoir.bandcamp.com. Buying both the tape and the CD-R is worth it.
Posted by The Inarguable at 10:59 PM