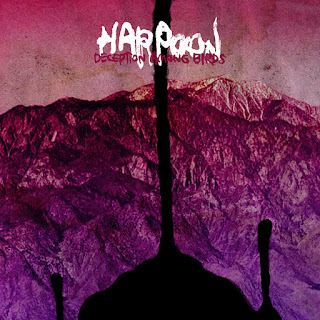 So I'm just going to come right out and say it: up until a few weeks ago, I could have lived without listening to any more Harpoon. After seeing them open for Sunn O))) and listening to their split with Locrian, I was never really too impressed with what they were doing. Maybe it was because I didn't really get into "hardcore" until late 2009, but I just sort of wrote off Chicago hardcore trio + drum machine as just another obnoxious, thrashy hardcore/grindcore mix to whom I didn't need to spend time listening. When I received a promo of this album, I won't lie, I was a little hesitant...but with Seventh Rule's awesome release roster this year (Batillus and Atriarch), I figured I'd give my hometown brethren another chance, and I'm super glad I did.

Since I last heard Harpoon, they've really grown into something special. The drum computer is still there, but musically they have grown exponentially. Though Harpoon is still undeniably a hardcore, or, dare I say, post-hardcore band, Deception Among Birds shows these three bringing elements of all sorts of metal, noise and progressive rock, and brilliantly composed melodic sections to create something that is both "heady" and intriguing as it is an enjoyable and fun listen. Yes, as I've said a few times so far, Harpoon still utilizes a drum computer, but there is a definite sense of thoughtful composition and finesse in how the drum tracks were put together, taking in various rhythmic factors between the guitars, bass, and voice, to add a distinct, powerful amount of metric intrigue overall. Bizarre enough to keep interest, but heavy and familiar enough to please any hardcore fan.

Deception Among Birds is a not-so-gentle reminder that there are still new things musicians can do with hardcore. Harpoon has definitely delivered with this album, bringing along with their own brand of heavy, catchy hardcore that bounces around just enough to make this reviewer want to listen to it over and over and over again. Be sure to order this CD directly from Seventh Rule for an absolutely dirt-cheap price - I know I will.

-Jon
Posted by The Inarguable at 5:44 PM