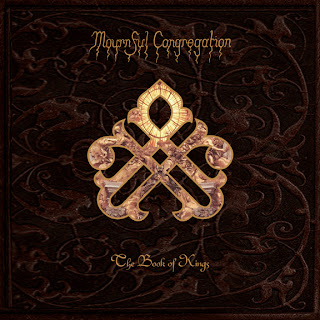 Mournful Congregation is undoubtedly a band that needs no introduction. I mean, when you think about it, this Australian trio has been making funeral doom metal since the beginning, having released their Weeping demo in 1994 - the same year as Finland's Thergothon's mighty Stream from the Heavens, considered the first full-length funeral doom album. From then on we've seen Mournful Congregation slowly march forward with each release, showcasing a tasteful balance near-perfect songwriting, technical prowess, and pure despondency left unmatched by any others who dare attempt to emulate their style. The amount that these three men have done for the subgenre of funeral doom, and doom metal together, is beyond fantastic, and the fact that they haven't split like the rest of the style's forefathers is a testament to their determination and devotion to their existence as Mournful Congregation.

Mournful Congregation's newest offering, the soon-to-be-released The Book of Kings is exactly what the title describes - it is the defining tome as written by the kings of funeral doom. This brooding, atmospheric, beautiful, and slow album is a four song, 77-minute epic, filled to the brim with somber melodies, expansive harmonies, and an attention to detail that rivals romantic classical composer Piotr Tchaikovsky's masterful ear for texture. With ever-growing walls of guitar and fortified with deep, thick bass and cavernous drums, The Book of Kings is almost a castle within itself, built brick by brick by the prodigious doom metal architects themselves.

Vocalist Damon Good's thunderous growls, heartbreaking spoken word, and ghostly whispers never encroach upon fellow guitarist Justin Hartwig and his own beautiful mass of guitars, acting more as a presence within the recordings rather than metal's usual voice-centric approach. As a guitarist, Good's understanding of the band's overall musical construction as a much more powerful vehicle for expression, leading to much longer instrumental periods than in previous Mournful Congregation releases, leading to some of the most explosive, emotional, and outright powerful climaxes heard within funeral doom metal.

Never leaving a processional pace, Mournful Congregation have truly outdone themselves with The Book of Kings, impressing this writer enough to say it might even, no, it absolutely trumps their 2005 full-length the Monad of Creation. Their Chopin-meets-Wagner sense of harmonic construction and melodrama sets them apart from the rest of the normally dull and uninspired genre of funeral doom metal. The kings themselves have written their own book, and it is good...very, very good.

The Book of Kings will be available from the beyond fantastic 20 Buck Spin and Weird Truth records this Tuesday, November 1st.

-Jon
Posted by The Inarguable at 9:08 PM