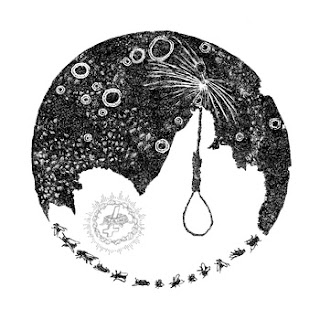 Garry Brents has to be one of the most talented, if not most versatile musicians in the United States. Since his first public musical activity in 2005, Brents has participated in projects ranging from heady, brutal death metal to delicate, nostalgic electronica. With every new project just as good, if not better than the last, Brents's deep understanding of music consistently shines forth, each time with a newfound sense of maturity and depth. Now I, personally, have been waiting eons (well, since 2009) for new Cara Neir material, having been thoroughly impressed with this Texas duo's eclectic mix of grinding black metal and ethereal, atmospheric sludge, but, with Brents recent veering into the esoteric realms of post-rock and electronic music, it was hard to tell how that would manifest itself.

With their new album, Stagnant Perceptions, the duo of vocalist Chris Francis and instrumentalust Garry Brents bring forth a visceral combination of equal parts black metal, dark hardcore/grind, and Document #8 era pg.99-obsessed screamo. Though, at this point, Cara Neir is undoubtedly a black metal band, there are some portions of this album where they could easily be mistaken for a straight-up, stomping grindcore band, which is oddly fitting, due to guest spots on eight tracks by none other than Dorian Rainwater (whose name you might recognize from grind greats Phobia and Noisear). Alternating between melodic majesty and stomping rage, Stagnant Perecptions show Francis and Brents bringing forth their clearest, darkest efforts, and it shows. Cara Neir's near-schizophrenic approach to "blackened crust" or "blackened hardcore" is a manic affair, lurching at the listener with teeth bared.

I might have only had Stagnant Perceptions in my possession for a little under a week, but I feel it's already earned a place in my "favorites of 2011." The fact that a band can bring together so many different sounds, appealing to Darkthrone, Gridlink, His Hero is Gone, and Funeral Diner fans alike, and still sound cohesive is a laudable feat. As it is with every Brents-related release, Stagnant Perceptions is available for free from their BandCamp, but if you're feeling generous, you can try and purchase one of the fifty available copies here.

-Jon
Posted by The Inarguable at 4:36 PM