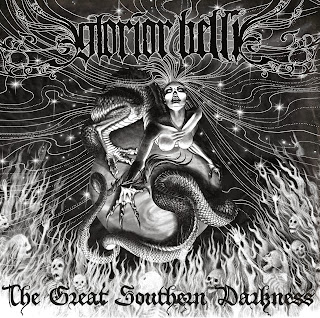 Since I was first shown their 2003 demo Evil Archaic Order, France's Glorior Belli have been a band I would only listen to sporadically. While I did consider myself a fan, I rarely found myself putting on one of their albums and listening to it entirely, instead opting to listen to random songs spanning their discography. I was never extremely impressed with any of their albums as a whole, but found that each album had a few stand-out tracks, some of which being particularly stellar. With their latest effort The Great Southern Darkness, the band continue where they left off with Meet Us At The Southern Sign and continue with their incorporation of elements from various genres, namely the blues and hard rock. It's as if Glorior Belli have long tired of being "just another black metal band" and this boredness shows when taking their musical progression over the years into account. This French/Italian trio have seemingly delved further and further into experimental realms with each new release, even going so far as to create a side project (11 As In Adversaries) to put out an album that was originally slated to be released under the Glorior Belli name.

This outside-genre incorporation isn't necessarily a bad thing... In a time where the very mention of the term "experimental" tends to turn up noses within black metal circles, a select few prove it is not only healthy, but, if done right, can be a much needed breath of fresh air. With this new album, these Frenchmen (and Italian drummer) have created what is undoubtedly the culmination of everything they have slowly incorporated over time. Due to the band's undeniable ability to perform a convincing "Southern" swagger along with a nice dose of blues-influenced-rock, it is incredibly fitting that the band has used the word Southern in its last two album titles. Naturally, the black metal is still there, though it is just one element which defines the "Glorior Belli Sound." This time around, I had no problem soaking this in within a single sitting and it flows exactly how a completed album should. Musically and vocally, Glorior Belli have take numerous paths to create a highly varied and enjoyable piece of work.

-Dallas
Posted by The Inarguable at 11:04 PM