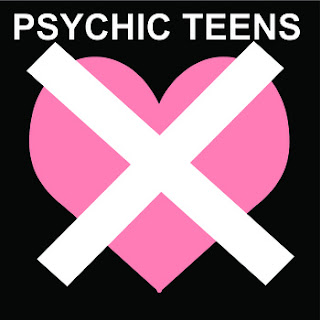 Jim Morrison would have made a great post-punk/goth rock frontman. I mean, when you think about it, Morrison's deep baritone and awkward, inebriated charm could have very well placed him among the Ian Curtises and Peter Murphys of the world, but he was born five or ten years too early. It's really a shame - I often wonder what "Light My Fire" would have sounded like with New Order as the backing band...and it would have been pretty awesome, but those are merely pipe dreams. Apparently Philadelphia post-punk group Psychic Teens felt the same way I did, because TEEN is as close to reality as my Morrison-related dreams will allow.

Somewhere between groovy, punky goth rock and  industrial rock, resides Psychic Teens's infectious, bass-heavy pop offering that is TEEN. Described as "Jim Morrison fronting Head of David," the trio of Joe, Dave, and Larry rather effectively mix influences as far-reaching as The Doors-inspired psychedelic rock (Morrison's all over this review, isn't he?), noise rock, and maybe even black metal (check out the "almost blasting" climax of "YUNG"), all while sounding accessible and without that horrible conceit that plagues many "experimental pop" bands nowadays.

If you're in the mood for some zero-bullshit, solid post-punk/goth rock which lacks any pretenses (there's nothing as straight-forward as a crossed-out heart), Psychic Teens is definitely up your alley. You can stream TEEN (and buy stuff) at the Psychic Teens Network Bandcamp. If you need me, I'll be awkwardly "Ian Curtising" for the rest of the day.

-Jon
Posted by The Inarguable at 7:37 PM