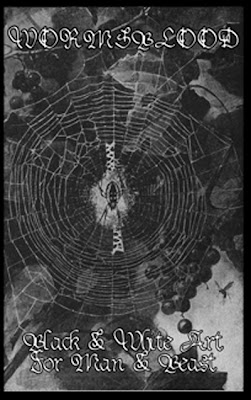 Wormsblood has to be my absolute favorite "weirdo black metal" band. From my first experience with them, unknowingly seeing their first and probably only live appearance at the once-in-a-lifetime Matchitehew Assembly the summer of 2009, this group of proud Wisconsinites has been absolutely integral to my own musical evolution. Wormsblood's brand of drunken, sloppy, occult-oriented "blackened stenchcore" (what a lovely name) taught me that you don't have to record your best performance or release the absolute cleanest recordings to be one of the coolest bands around.

Recorded during the uncomfortable heat of 2009's all-too-long summer, Wormsblood's Black & White Art For Man & Beast proves itself to be this "supergroup"'s (Wormsblood boasts members of Burial Hex, Jex Thoth, and Kinit Her) most accessible and ambitious release yet. An eerie, chilling mix of sloppy metal, power electronics, neofolk, and the drunken ramblings of a madman of a vocalist, Black & White Art For Man & Beast is a display of unreleased tension, always bending but never unleashing itself. Wormsblood's raw, strange, oddly catchy tunes are the auditory equivalent of a coven of witches drunk on Black Minttu; awkward and clumsy, but still oddly enchanting.

Though Wormsblood's future is still unclear, the spells they cast via Black & White Art For Man & Beast are among the finest in the underground scene of bizarre, "outsider" black metal. A drunken meditation on magick, spiders, and old texts, Wormsblood has definitely "done it again." The Black & White Art For Man & Beast cassette is currently available in limited quantities from the always stellar Brave Mysteries label.