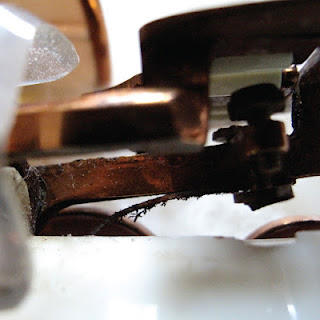 We're certainly on a roll with top-quality albums. So, straight into Bengt.

Bengt is not Gustafsson's Needs! (2010), with its heavy use of electronics--Bengt actually contains no electronics and no discernable overdubbing. Nor is it the standard popular impression of Mats Gustafsson, the screaming madman Brötzmann foreshadowed. It's still not the most accessible record, but it's pretty clearly a work of a focused master.

On Bengt, Gustafsson is simultaneously exploring the limits of timbral experimentation through extended technique and giving tribute to the New Music of the 60's and 70's. The title refers to Bengt Nordström, known best for producing Ayler's Something Different and more significant to Mats Gustafsson as a longtime mentor. Basically, Gustafsson spends just short of 40 minutes displaying usually pointillist explorations of every imaginable extended saxophone technique, infrequently interspersed with surprising moments of accessible melody. Surprising not only because of the tendency towards shrieking and atonal bursts, but because the sounds Gustafsson spurts are usually completely devoid of any intention to create a sense of flow or continuity.

Gustafsson has a great sense of melody, though. Every little bit, when melody exists at all, is both drenched in jazz feeling (think back to the days BEFORE free jazz was dedicated to timbral exploration) and simultaneously wrapped in techniques you'd never hear anywhere else. He manages not only to wring personality and emotion out of those raw edges, but manages somehow to approximate parallel octaves while playing a melody--not exactly something one expects with an instrument whose harmony is itself an extended technique.

Solo saxophone, because of its necessary sparsity (though Rolf-Erik Nystrøm might argue that point) is certainly not the most easily engaged genre, and Gustafsson's aesthetic goals only infrequently coincide with those found in the majority of musical history. However, Bengt is a masterwork of the distinctive aesthetic it creates and is a deep trench of inspiration for any modern composer or performer. Congratulations, Utech.