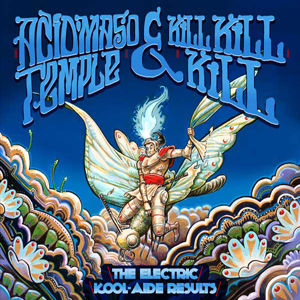 Severe and lobe-shattering psychedelic rock deliverance from this offshoot of the Acid Mothers Temple collective, complemented by the equally devastating contributions of Kill Kill Kill.  The "Maso" in the moniker refers to the addition of Yamazaki Maso, better known as Masonna, to the trio lineup of guitarist Kawabata Makoto, former AMT bassist Suhara Keizo, and drummer Aiko, and also represents an approximation of exactly how this particular configuration of the AMT should sound: NOISY.  The three tracks offered up do not disappoint in that regard, being aggressively toothsome and bathed in numbing echo effects alongside some considerable tape and synthesizer degradation from Masonna; the result is one of the most satisfying AMT outings in some time, recalling the blasting force of their early PSF work as filtered through the darkest recesses of outer space proper.

This is a very stripped down unit, free of much of what makes the AMT so unique and far-reaching in their musical interests.  Without the presence of Higashi Hiroshi and Tsuyama Atsushi, Makoto leads the show, and he seizes the moment to fully indulge his rock and roll demons.  This is primarily a guitar side, with songs playing second string to the intense kraut-inspired rock riffing of the Speed Guru, coming off like Aufgehoben by way of Motorhead.  Makoto shreds here, with caustic leads that shed blood and go for broke, whirling flurries of picked notes virtually shorn of effects and relying purely on adrenalin.  It's some seriously exciting work, and the band supports it with aplomb, laying down crude and bludgeoning forms that up the krautrock ante while remaining true to the psychedelic totality of the aesthetic proper.  Masonna blankets the whole thing with his trademark space synths and gauzy sound torpors, causing the tracks to sound like they're coming from the inside of a cardboard box beamed in from a satellite floating a thousand million light years from earth.  Masonna handles the vocals here as well, and his delivery is fittingly laconic and bored, washed out with miles of echo and reverb, ululations stretched out into the infinite.  This is some heavy, spacey, awesomely wasted mainline jamming, and it's a joy to hear.

Kill Kill Kill were unknown to me prior to this (the only other recording I know of is a split with Oxbow), but their lone 20 minute track makes me want to pretty much gobble up everything they've recorded (the 2CD version of this was released by Kill Kill Kill, and while there's nothing else from Acid Maso Temple it does boast almost an album's worth of material from them along with some blasted hypercolor Rorschach blot style artwork).  Coming off like a dub band from hell, Kill Kill Kill whips up a froth of echoey atmosphere and vocal histrionics, all existing within a corpulent cloud of noxious feedback and belching amplifiers.  What little propulsion the track has recedes in the wake of an inherent stagnancy, an unwillingness to grow, and a belligerent dedication to primal rock form.  This is more or less free-form distortion accompanied by all manner of audio wipeout and some diseased jazz drumming, a potent mixture of the ethereal and the raw.

"The Electric Koole-aide Results" is one of the best conceived splits I've heard in a long time, reaching the pinnacle wherein both acts complement one another so perfectly you almost lose sight of the fact you're listening to two distinct entities.  I picked this up on a whim at the last AMT show I attended, and while the price was steep, I'm glad I grabbed it (Masonna being involved was the clincher).  There were a scant 200 copies made of the vinyl, but the 2CD version released by Kill Kill Kill might still be around.  If you go that route, you get the added saturation of about 50 more minutes of music from Kill Kill Kill and some truly eye-frying visuals.  It might be available through the band if you're lucky.  Either way, it's a destroyer, a true third eye opener.  Saturation through obliteration.

-Cory
Posted by The Inarguable at 8:42 PM