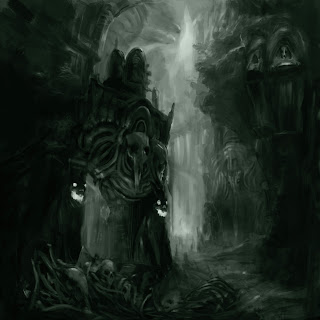 While listening to Canadian death metal trio Auroch’s debut LP “From Forgotten Worlds,” I couldn’t help but consider the contrast between the United States and Canada. For as can be clearly seen, my native land is a superficial wasteland justifiably associated with murder, racism, sexism, high blood pressure and a huge, gaping abyss between the rich and poor that also enjoys picking on other countries and being an overall cunt. Canada on the other hand…well. They seem so much nicer – much easier access to pills to pop, incredibly low crime rates and a higher quality of life, even among the elderly. The world doesn’t hate them, either.

However, underneath that serene, maple-flavored layer of compassion there must be some long-hidden demand for aggression, some demand for dark gods of revenge and retribution. And what better place to seek inspiration for articulating these urges than America, the superpower that perfected all things on the left-hand path? Hell, it’s all over America’s history, from past to present to the imminent future. So Ican't help but feel it likely that this explains the foundation of the music of Auroch, a trio of dudes that plays what they call “Lovecraftian metal” – horror-inspired music to scar the soul, express the fears of the unknown and relish in the fever felt through blood bells chiming. I hope the band visits Lovecraft’s corpse and performs on the spot – undeniably, his corpse would rise and start narrating The Call of Cthulu to the sounds of “Fleshless Ascension” and crack a rare smile.

“From Forgotten Realms” effectively embodies everything one could ask for in an undeniably metal album; no quarter for anything that could even remotely take away from the mood of the album. While unprecedented amounts of metal bands are running the gamut on expanding their sound from jangly techno beats to djent to thick reverb layer cake, Auroch feels like a band that collectively pulled a Rip Van Winkle, knocking out in 1992 and waking up just a few months ago. Strong songwriting makes this album less a plunderphonics grab and go spree and more of a very strong, cohesive gust of refreshing, northern Arctic wind. All throughout “From Forgotten Realms” the trio serves up heapings of raw cookie monster vocals, guitar solos, high pitched cries of ecstasy, pounding ritualistic drums and wonderful anachronistic lyrics about opening portals, listings of Lovecraftian deities and the feeling that your mind is being shredded into strips of fajita meat because you cannot fathom the incomprehensible tongues the band is invading your mind with. Indeed, the trio of Sebastian Montesi, Zack Chandler and Paul Ouzounov deserve well-earned praise for taking tried-and-true elements and working them into a ludicrously effective blitz on what sacredness remains in everyday life.

Far too often, nostalgia is the impetus for inspiring new artists to create music. Sometimes these musicians succeed in their homages by taking a refreshing look on old material while others, more often than not, fail by coming off as carbon-copies unworthy of hard disk space. (Good thing we have YouTube.) Indeed, that latter category has raised the ire of many people with keyboards at hand, who are more than happy to tell you that “X band sucks because they sound just like Y band.” But sometimes a throwback to the past is just what we need; with their penchant for impressive riffage and murky oceanic vocals, Auroch manages to not only live in the past, but prosper in the present.