This review begins with an experience.

About a month ago, I was flying back from an excursion overseas on a sunny day.
I was unaware that this flight was going to pass over Greenland.
What ensued was awe-inspiring: looking down and seeing the glacial patterns, icebergs, rock canyons, and deep trenches was an experience I know not everyone gets to know in their lifetime. Sure, people live on parts of that large continent (its overall population number being not unlike that of a small midwestern town), but the sense I got while looking down was "my goodness, there is barely a soul down there. This truly is remote."

Fast forward a month.
I'm at Reckless Records in Chicago, realizing I need to hurry up and write more reviews. I make an impulse buy which turns out the be this album. I had never listened to this man's recordings, nor had I yet seen his website or art. This was purely my first introduction to his craft.

"Novaya Zemlya" is an archipelago on the far northeast of the European continent, with rare human interaction besides the few who live there. Most of Köner's works, as it seems, are inspired by such areas and the almost metaphysical environments he experiences in such places.
This album, then, can only be a success.

With three tracks full of low-frequency washes, distant field recordings, and almost unnoticeable and subliminal blips of technological soundscapes, this album is a sheer paradise for people like myself who wish always to be in the opposite environment which I am in. We are busy, this has no agenda; our world is obnoxious, his world is empty.
This is three tracks of an almost complete antithesis to the life we in the urban world know.

...While I was on that flight, my plane was filled with nothing but the opposite of the landscape below me. There were screaming children and cramped spaces abundant, with impatient people waiting for the restroom access or their meals, and televisions with stupid-humor-comedies just to ensure that nobody need commit the unpardonable sin of 'wasting time'.

Below me was no claustrophobic cabin, no ear-piercing and hard-hitting sensory violation. Below, there was only a vastness which gave me solace for hours.

This album will always remind me of this, as its golden silence echoes the desires of my psyche. Music, and music appreciation, after all, is all about connecting with what you are hearing in a transcendent way.
Thank you, Mr. Köner. 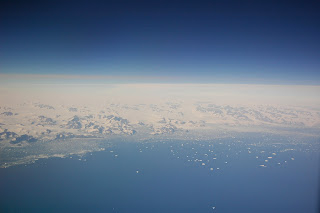 My own visual of a new land.

Posted by The Inarguable at 9:35 PM