Yes, I've known for quite some time that Maurice de Jong is broken in a special, personal way. Initially, though, I briefly listened to De Magia Veterum and decided it might as well be Gnaw Their Tongues (his more popular project), and stuck to the latter. 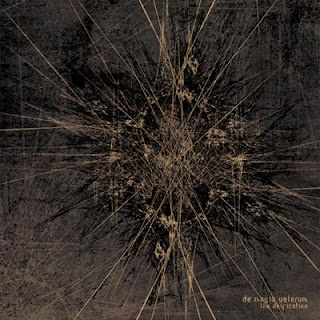 Something happened in the meantime. De Magia Veterum is now much more recognizably guitars and drum-machine; not to say that it doesn't divert into the kind of active, twisted dark ambient that M specializes in, but The Deification is manifestly an impenetrably insane black metal album. Like the kind that has to be a studio project not so much because it only has one member as because it will likely take me a few months to even hum a scrap of tune here or there; remembering enough of this material to do a brief set would be the full-time work of a year or more.

I've seen a number of journalists use terms like "swirling chaos" in reviews; it's more apt for "The Deification" than any other metal work I've ever heard. And I seek out that sort of thing.

I just reviewed the new Ehnahre album, which seemed extremely short at 37 minutes. The place that Maurice's mind has reached in 30 minutes makes me feel like I've spent a day being beaten with a hammer.

WHAT DID YOU DO.

P.S. - I want a large canvas print of that album artwork.