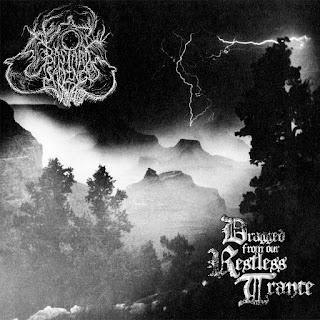 When I think of Virginia, I am reminded of goofy pseudoreplicas of the Colonial United States, rife with cheap "period regalia" and hilarious imitations of 1700s-era speech patterns. Black metal? Forget about it, we're too busy cupping our ears in the presence of over-spoiled children, no doubt playing their crappy tin whistles with a zeal which rivals the Zealots themselves. Yet, when I first cued up Dragged From Our Restless Trance, Bastard Sapling's Forcefield Records debut, the veil was lifted and the tourist-y landscapes transformed into bleak, frozen fjords. How about that?

In a world where the United States is stuck on a Weakling bender, main-lining big ol' meandering riffs and early post-rock inspired atmospheres (not necessarily a bad thing, just overdone in my book), Bastard Sapling takes us back to the early-to-mid '90s, back when bands like Ulver, Gehenna, and Satyricon rules the hypothetical airwaves. This icy-cold album boasts some of the burliest black metal riffs this side of the Atlantic beneath the consistent, and always heavy, gusts of atmosphere. Always melodic, powerful, and never meandering, the Ulver comparisons go even deeper, with complex guitar harmonies and tasteful, Skoll-inspired bass interplay. Hell, the album even begins with a heavily reverb-effected drum fill which happens to bear an extraordinary similarity to the ever-present, ever-cited pillar of black metal taste Bergtatt's introduction "I Trolskog Faren Vild." I normally abhor this sort of tribute-based stylistic lifting, seeing as it normally ends up diluted and boring, but this particular style of second-wave inspired black metal has all but disappeared from the spotlight, making room for the aforementioned Weakling worship which has since grown stale and underwhelming.

So, given that Bastard Sapling's debut full-length has manifested itself as a sort of demonstrated history, is it still good? Hell yes it is. I've missed the fearlessness of the '93-'97 era of black metal, where bands didn't always have to be majestic and could throw curve balls (like some of the thrashy riffs peppered throughout this one) because they wanted to. Who cares about expectations? They just wanted to make good music, and Bastard Sapling certainly have. If you are unfamiliar with this era of music, I'd recommend that you check out Ulver and Gehenna's first three albums, as well as the pre-black'n'roll Satyricon material, Dark Medieval Times being an all-time favorite of mine, and, just to be well-rounded in the classics, listen to some goddamn Bathory before you check out the new Bastard Sapling album...but be sure you do. This is a good one, and those of us who longed for that golden era lacking in most pretense will be more than happy to listen to Dragged From Our Restless Trance over and over again. It's snowing outside today on this blackest of Fridays, so I imagine this will remain a constant for the next few months.