Winterfylleth - The Threnody of Triumph (2012) [Candlelight]

I haven't bothered to track down and listen to any Winterfylleth since their self-released demo ("Rising of the Winter Full Moon," 2007)--I'd jumped on board for that because of the publicized "English Heritage" aspect, not that I'm cough nationalist in any way cough. I liked it well enough. The demo was enjoyable, and I hadn't yet been exposed to the Wolves in the Throne Room-spawned foulness that was shortly to creep over everything I loved. 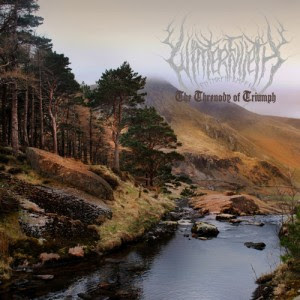 Art does not exist in a vacuum; each work has connections made significant by its place in time and culture. In 2012, "The Threnody of Triumph" is over an hour of reasonably polished Cascadia--nothing deviates from the most overused patterns of the Threnos-imitation crowd, and other members of the crowd make it more interesting than this. The only reprieve from the midpaced blasts and rock beats with double bass with nice, if untutored harmony is the occasional lapse into instrumental neofolk or mediocre-at-best wordless choir neofolk. Literally the only other drum beat on the album is a lone Velnias-styled tom rhythm in "The Swart Raven," which immediately follows the aforementioned ill-advised attempt at choral performance.

Stop imitating Americans. It was obnoxious when the whole American scene was trying to be Scandinavia 1.1; it's obnoxious now that Winterfylleth and Altar of Plagues are turning it around. I'd hate and ignore me in your shoes, but please. Try to outdo, not repeat.

Posted by The Inarguable at 7:47 PM