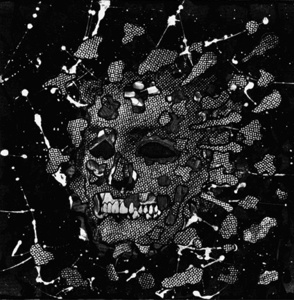 This, as you can see from the title, is a sort of double-split; not only does it feature heavy Moloch sludge (it's the Leicester Moloch, not one of the other dozen bands hailing the child-eater) and UK Closure's pounding powerviolence, it's a split release between Moloch's Feast of Tentacles label and the long-running, carefully limited King of the Monsters.

Moloch and Closure differentiate themselves from most of King of the Monsters' catalog in that, like their names, neither band is a unique crawl into some strange part of the psyche and sound. They are, however, goddamned good at what they do. Closure hits the middle of the gut-smashing glory that is the repetition-honored powerviolence sound--the perfect mix of blasting chaos and pounding, darkly righteous power. Every chord and beat is exactly the right thing that needs to be there to destroy everything.

Moloch are veterans of that heart-rushing, powerful end of sludge that might as well be a powerviolence band that never quite got around to blasting through a fast section. It's all of the fulfillment of wrath and revenge done with careful planning.

If these guys aren't local bands for you, know that they'd be the ones you go to see every time they play. Good, surging hatred. Go ahead and get this split. You'll repeat its 11 minutes until you feel like you've been at a show.

Posted by The Inarguable at 4:23 PM