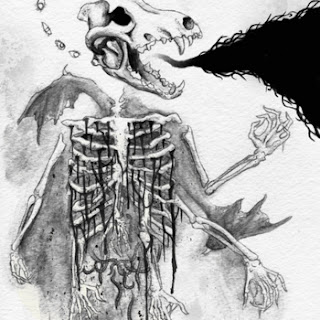 Two of San Francisco's most outre' black metal visionaries share plastic on this cassette split, unleashing a torrent of death-worshiping obscurity and buzzsaw hyperspeed math-riffing.  That the bay area continues to spit out so many cryptic and bizarre interpolations of BM formulas is one of the main reasons the genre remains so relevant for me despite being well past its cultural saturation point (and arguably its philosophic meaning), and The Flenser is to be commended for getting this document out there.  Both bands turn in fine work; what the split lacks in thematic coherence (it does feel haphazardly thrown together and a tad obvious) it makes up for in its musical offerings.

Palace of Worms gets the first side with four tracks heavy on thrash adaptation and technical guitar patterns (reminiscent of early Gorgoroth), with the vocals trending more towards the death metal side of things.  This has probably been my major complaint with the band (as well as with labelmates Lake of Blood); the vocals don't seem insane or desperate enough in terms relative to the musical approach.  A lot of the material here is steeped in melodicism, and the gruff approach of the vocals doesn't quite match the yearning feel the music is striving for.  If you can get past that and focus on the exceedingly fine layered guitar work, Palace of Worms are easily on the cusp of transitioning into a unit capable of epic compositions (again, not unexpected being that the band shares members with Weakling-derivatives Dead As Dreams.)  The mournful guitar lines that close out "Temple of Failure" are both inexhaustibly sad and stinking of defeat, dragging Palace of Worms' side to a withering, hollowed-out end.

The reason for this split's worth (at least in my eyes), though, is the lone track on side two by the obtuse and hermetical Mastery, one of USBM's best kept secrets.  Across a far too scant eight and half minutes, Mastery tears across a black metal landscape defined by insanely baroque and dissonant guitar figures (imagine Slint at 220 bpm), scathing pulses of blastbeats, and bile-drenched vocals that sound like knives being raked across whole fields of dead skin and scabs.  Mastery are similar in approach to older Leviathan in that black metal serves only as a template upon which to splash a variety of musical influences; the results are something far more extreme, brain-numbing and altogether fucked up than any sort of pure black metal could be on its own.  Mastery's contribution is a more than worthy follow up to the massive two disc assemblage released by the might tUMULt in 2011 (still available) and should hopefully serve to shed a little more light on one of the bay area's most aggressive and impressive BM transmogrifiers.

The Flenser has generously made the recording available for free through their bandcamp, but you may as well just buy it.  It's inexpensive, and the quality of the material from both bands makes it a worthy addition to any black metal collection.  If this was just a one track tape from Mastery, I'd still think it's worth the purchase, because Mastery are that fucking good.  My only real complaint with the split is that there isn't more material, but for a band of Mastery's caliber, I will take whatever is offered.

-Cory
Posted by The Inarguable at 2:46 PM