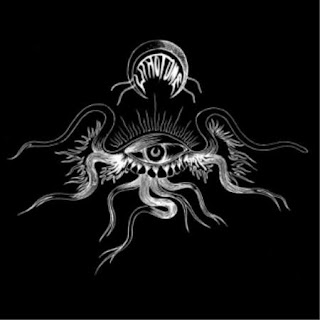 I haven't made good on my 2013 resolution to discuss more death metal, so consider this my own personal kick in the pants. Do you remember that New World Black Metal 4-way split I reviewed last week? It turns out the madmen behind that compilation have been quietly working on one of the most savage death metal releases I've heard in a long time. Lithotome is the union of N. Imperial (Krieg), Esoterica (ex-Chaos Moon/Esoterica/Krieg), and The Many (Bitter Peace/The Many) in an attempt to create something filthy, misanthropic, and, most importantly, harrowing. A sort of fusion between the timeless works of Finland's Rippikoulu (a band with whom everyone should be at least partially familiar) and the heavier mid-era works of the ever-popular Portal.

Falling around the halfway point of Lithotome's self-titled debut, "Indulge the Flesh of the Earth" opens with an excruciatingly slow bout of dissonant, stuttering death/doom metal. A gurgling mass of throat torture, war sirens, and muscle, this nightmarish dirge explodes into a mid-paced blast, slowly gaining momentum and picking up speed and enveloping all which surrounds it, only to drop back to its initial funereal pace at its close. Esoterica's guitar work is at its finest and most chaotic, bending and weaving through some of the most hand-smashingly uncomfortable dissonance I've personally experienced with this sort of death metal. Imperial, as always, sounds inhuman. I've always felt his voice would be a perfect fit for death metal, especially after his work with crusty death/doom monster March Into The Sea (are they still a thing?), and now that I've heard his signature "manimal gurgles" over something a bit more chaotic, my suspicions have been confirmed. You don't want to miss out on this one, or any of the other new releases on Fall of Nature Records.

"Lithotome was created as a means to express the grime and murk of the mind, the shit under your brain's boots so to speak. With a picture of humanity's deepest desires set in disgusting tunnel vision we've set forth to bring a twisted glimpse of the filth that reality hides.

Esoterica had conceptualized the record long before I joined. He envisioned a concoction of death metal and some of the older, more interesting doom bands. Thematically and lyrically it's just as murky and bizarre as the music itself, abstract and abusive. This is just a glimpse of what's to come." -N. Imperial


"Lithotome's debut self titled full length of disturbing death metal has finally been birthed. Formed in 2010 as the brainchild of Esoterica (ex Chaos Moon/Esoterica/Krieg) as a lurching mass different from his other creations but just as touched. Imperial (Krieg/Twilight) became involved in 2011 and added his wretched vocal stylings to Esoterica's twisting and changing form of writing while The Many (Plastik Musik/Bitter Peace) added a pulse and shell, resulting in this, their first full length.

Lithotome can be described as a blend of the madness of Portal and ancient Finnish death metal sub 1994. Dense and unnerving death metal with little concern for traditional aesthetics, this is a record which will crawl into your subconscious and silently reap for time to come." -Karl Rogers/Fall of Nature

Posted by The Inarguable at 2:19 PM