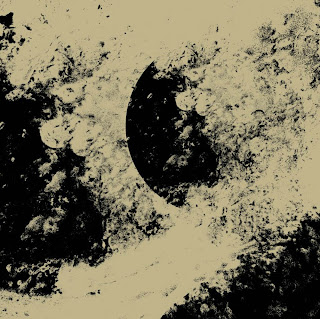 I'm not going to lie, it's been a while since we've heard from the otherwise prolific Sutekh Hexen. Granted, this isn't the first time the Become EP was released this year, but Auris Apothecary, the magnificent purveyor of micro-releases on odd formats, chose to unleash this monster on a 1/4" reel, making it impossible to listen...so I waited. Not to say it was bad of Auris Apothecary to release this on a legitimately dead format, but I, like many others, lack a reel-to-reel player, so waiting is all I could really do. I figured someone would release this on a more "accessible" format (hard to believe I'm saying that about vinyl in 2013), especially given the fact that the Auris Apothecary release sold out within hours, and King of the Monsters was nice enough to confirm my suspicions, giving Become the full vinyl treatment.

In the wake of Larvae, which was released earlier last year, it seems that the constant touring and otherwise lack of recordings from Sutekh Hexen has treated them well, allowing Kevin Gan Yuen and Andy Way to experiment further with live electronic sound and extensive textures, manifesting in the massive Become. A two-part experiment in long-form, droning, blackened ambiance, Become shows Sutekh Hexen taking a breather from their usual brand of non-stop, metallic walls, giving way to a more dynamic approach which lends to them rather nicely. It would seem that the "cheese grater to the ear" approach found on the demo trilogy and Luciform is a thing of the past, instead replaced by subtly shifting textures, crawling, distant drones, and the occasional, much more powerful black metal blast. The interplay between Gan Yuen's bizarre riffing and Way's extensive electronics wizardry is at its most cohesive, feeding off of each other in a way which only truly comes from the aforementioned live experimenting, rather than studio magic. This EP ebbs and flows in waves of cleansing white noise, scrubbing away at endless layers of filth and exposing light.

B-side "The Face: The Void" opens with a monstrous, doomed black metal riff, fleshed out with bouts of noise and harsh vocals. In the distance lies a muscled pulse, a rarity in Sutekh Hexen's discography, pushing the nightmarish being forward. As this faceless void lurches on, it devolves even further into abstraction, taking on characteristics of harsh noise, cavernous drone, and shimmering guitar ambiance. It's quite striking, really, and a tour de force of Sutekh Hexen's ever-gaining momentum and maturity. Brilliant darkness.

Become is currently available for pre-order from King of the Monsters Records. Alongside the standalone LP are two different gold LP die-hard editions, one containing a slipmat, and the other including both the slipmat and two shirts. This is cool.

Editor's Note: Yeah, there's some drama going on with Sutekh Hexen. Whatever. Pick your side and keep it to yourself like I did. Black metal isn't about friendship, anyway.
Posted by The Inarguable at 5:43 PM