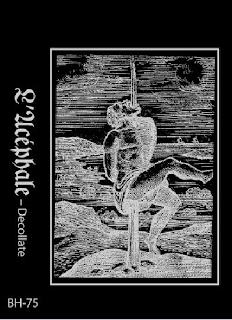 I've always been a big fan of L'Acephale, dating back to the martial industrial-meets-cheese grater-grade black metal demo "Mort und Totschlag" (which always seemed to end up misspelled as Totsclag). There was always something special about project mastermind Set Sothis Nox La's thoughtful and educated approach to complex, majestic, and absolutely ripping black metal. A journey through the booklet which accompanied 2009's Stahlhartes Gehause revealed the inner workings of a scholarly man, citing Rom (gypsy) mysticism, modern French philosopher Georges Bataille, and metaphysical learnings, all stated with clarity through some of the most enjoyable and unique black metal I've heard in some time. Aurora Borealis's Malfeasance showed a deep reverence for the neofolk and martial industrial influence which was hinted at throughout Stahlhartes, this time fully immersing the listener in dense washes of noise, crepuscular ambiance, and distant acoustic guitars. Ever the shape-shifting beast, L'Acephale's output has been as genre-defying as it has been spread out, with the two aforementioned full-lengths standing out among a handful of splits, demos, promos, and what have you to their name from the impetus of Set Sothis Nox La's headless horde.

A collection of covers and demos, Decollate (headless...starting to see a pattern?) is a unique release for L'Acephale, who, while they are no strangers to covers, have been strangers to the "demo" approach since the first release of the soon-to-be-reissued-once-more Mord album. Showing reverence to the greats, L'Acephale burns through ripping tributes to Emperor, Darkthrone, and the always appreciated Current 93. Referring to the collage of homages to their influences in the insert above, these covers, are warped into L'Acephale's own style, adding layers of complexity and tasteful modernity to clear and fitting tributes (listen to the neofolk rendition of "Flittermice as Satans Spys"!). Perhaps the most interesting aspect of Decollate is that this is one of the first times since the project's birth that we see clear and defined songs based in the different faces of L'Acephale, distinctly separating black metal from neofolk and industrial. Though the mesh is always appreciated, I personally find the distinction very refreshing in the sense of this collection-based-release.

The Decollate cassette is due out on Black Horizons in the next few weeks, and L'Acephale's next full-length is set for a 2014 release on French-Canadian label Union Finale.

Posted by The Inarguable at 6:57 PM