Interview with Blake and Brittany of WOLVSERPENT 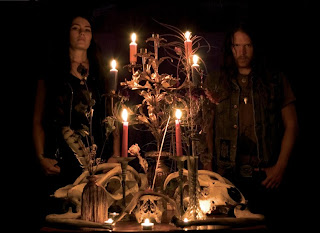 Over the past 9 years or so, Boise, Idaho, duo Blake Green (guitars, vocals) [right] and Brittany McConnell (drums/percussion, violin) [left] have crushed their fan base under the (silly, yet intriguing) name Pussygutt. Recently changing their name to Wolvserpent for reasons unveiled in the interview, we see an overhaul on the supreme doom heaviness found in their previous releases. As a two-piece, Green and McConnell prove that minimal ingredients can yield maximum results. Having had the pleasure of meeting these two and seeing them live, it is safe to say that the United States doom scene, as I have said before, is going to be perfectly fine in the years to come.


Jon: Hey there Wolvserpent crew! Thanks for giving us the opportunity to interview you!


Blake and Brittany: Of Course


Jon: Cutting to the chase, I have to ask it: Why Pussygutt? Why the sudden change?


B+B: Over the years we have considered changing our name often. We began the group fairly light-heartedly, we didn't take ourselves too seriously. We simply wanted to play music together, then our first show rolled around and a name was needed. Out of the ethereal slime came "Pussygutt"...and it stuck around for a while. It is such a powerful moniker, it served us well. With the new set, record and tour we felt the time was right so we decided to change the name.Wolvserpent is a beast that is part of our personal mythology so it fits. Who knows we might change the name for every record.


Jon: You spent around a year in the studio together working on "Blood Seed." How did this extended work period affect the original Wolvserpent/Pussygutt sound?


B+B: The length of time working on this album didn't really change things much. Seems that most of our records have taken about a year or more to make. "Sea of Sand" took two years and "Gathering Strengths" was hovering, nearly finished for almost a year while we completed "She Hid..." The big difference is that we wrote this set live and ironed it out for about 8 months before even beginning to record.  This was really different for us, documenting a live set. It gave us the chance to focus on capturing the tone of our equipment, the mood of the performance and the ritual of the enactment. This made studio time easier since everything was already written but, mixing was painful. We are excited to have a release that represents what we do live.


Jon: Having never been to Boise, Idaho, I cannot say I've ever been familiar with any sort of music scene there. How does Boise's music scene compare to other places you've been? What's it like to be a metal band there?


B+B: It's depressing and gloomy...isn't that what it's like being a doom band from anywhere? But there are always a few other warriors of the doom to walk the path with - Uzala and Beautician are a few hardened warriors to buff up Boise's ranks. Boise's music scene probably compares well to other places of its size... or smaller. There are a small number of people in various genres working very hard to do what they love. Growing up in a small town you go out to the show that's happening... probably the only show. But you get to hear a lot of different kinds of music and don't get stuck in one scene. It's difficult not having a good heavy show to go to, but we get to draw inspiration from the variety. For us, Boise is full of good friends and a descent amount of people, these days, that support us in what we do locally. There is not a whole lot of music in town that is similar to what we are doing ...we live in a desert, it's hard for any but a few to survive.


Jon: With "drone/doom metal" being a very specified subgenre, how do you feel Wolvserpent is set apart from the rest?


Blake: Having half of the group be classically trained and the other half self taught creates a unique approach and hopefully a unique outcome. Mostly we try our best to be true to ourselves in our music and create with some amount of purity, we get inspired by new and innovative things that we hear but
shoot to create something unique from within. Everything we do is 50/50 in one way or another.
If you live in the NW and have seen us live you know that we may sound different each time you see us. I think that is unique to a point, our sound evolves and changes but always sounds like it is made
by the same two people. Personally I try not to focus on being set apart....that's something that comes
from the opinions of others after the music is done and you know what they say about opinions.
Brittany: blah, blah, blah a bunch of pretentious crap :) (answering while at work, don't have the capacity to be eloquent or pretentious. "I like to play.")
Jon: How would you say Wolvserpent has evolved over the course of four full-length albums?
Blake: Over the last 9 years or so we have become a more singular mind while writing and playing. Our concepts and skills have developed together. So our output continues to have stronger focus and vision.
Brittany: We've worked intentionally to become clearer and truer in our sound. Experimentation is still an element but it is used to serve the overall aural experience of crushing beauty.
Jon: "Blood Seed" is only being released on vinyl, and a limited run at that. Though I think it's awesome, why a limited vinyl run?
Blake: Well, a limited run is relative. With the current state of things I think it is nice to get something unique if you are of the few who still support artists by purchasing a tangible product. Also, when they are gone, I would rather attempt to release some new material. We have about three unreleased albums we are sitting on!
Brittany: The vinyl calls and is a merciless master... Some things should remain in flesh and bone, while others can be relegated to the ether. We span the spectrum. It's a limited pressing because we hope that each slab is valued as much by the recipient as it is by ourselves.
The masses don't need to hear it, those who are searching need to hear it.
Jon: How do you two go about the songwriting process?
Blake: It goes like this. I have a dream of a song and I scribble unrecognizable jibberish on a peice of paper then hand it to Brittany and she writes and plays the entire thing while I record it. heh. :)
Brittany: Song writing is... a continual mystery. We make sound together, we live and meditate and toil, and some pattern comes out of it. I wander around in the murk and muck of unrealized concept. Bleak hears the pattern and draws it down into concrete form. Then we discuss, argue, cajole and reason with one another. Sometimes, like Blake said, it just comes in a dream.
Jon: What would be your absolute dream lineup to play with? Why?
Blake: Man, I don't know if I can answer this question without further restrictions! But it would be 4-5 days of drone, death, doom, black, italian goth and real metal. If there were no restrictions it would also include tibetan choirs, javanese gamelan, russian folk seance and loads of Persian psych.
Brittany: Sitting in the forest for three days and nights of solitude. :) Although, playing with Thorr's Hammer would be epic!...
Jon: And finally, what are your opinions on the modern metalhead?
Blake: Like a metro metal head? My opinion on people is if they are down they are down. If not....fuck 'em. I feel we've been blessed to meet some really down and true people on the road.
Brittany: The metalheads we know are bitchin'.
Buy Wolvserpent's latest ritualistic offering, "Blood Seed", here.
-Jon
Posted by The Inarguable at 12:47 AM