New Vision Éternel Songs and Video Up, and an Exclusive Interview with A. Julien 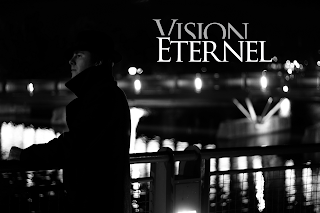 Vision Éternel is a musical entity born in the mind of Alexandre Julien, who likes to describe his sounds as 'melogaze', but is in plain words ambient post-rock. Hailing from Montréal, Québec, his most recent completed work (March 2010) is his ep titled Abondance de périls, which was reviewed by The Inarguable a few weeks back. His unique take on a guitar-laden concept album breathes new life into the aforementioned genres, and he should certainly be on your list of bands to keep an eye out for!
We are graced with two new songs titled "Narcosis (Thoughts of Sonya Session)" and "Neglection (Thoughts of Sonya Session)" that are as of yet unreleased and exclusive.

In the words of the man himself: "Those two songs were recordings from the album recording session of Abondance de périls. Both were altered a bit from their originals, "Narcosis" coming from the first ep Seul dans l'obsession, and "Neglection" coming from the second ep Un automne en solitude. The original idea was to have these re-recorded songs at the backbone to rebuild a whole new version of the songs; I was going to re-record all the fan favorites from the two first eps as well as some new material, and possibly even some songs from the third ep and contact various musicians to play solos on them. I had already contacted a bunch who had agreed, and most of them were personal friends of mine like Garry Brents of Parabstruse, Jordan Leal of Ethereal Beauty/Bonfires for Nobody, Slo from Smohalla, Camille from Smohalla, Eiman from Eliminator, Darklink from Triskalyon, just to name a few. Only two people ever recorded demos with solos over them, and that was Adam Kennedy of Beyond the Dune Sea and Darklink of Triskalyon, but they were recorded over the original songs, not the re-recordings."

To hear these exclusive new tracks, see below:
Narcosis (Thoughts of Sonya Session) by theinarguable


We are also pleasantly surprised with a wonderfully dreary and somber high-definition video for "Narcosis", compliments of A. Julien himself:


Alongside with our revealing of "Narcosis" and "Neglection", Dedicated Records has also announced their latest compilation Palms, by a group called the Great Messengers, a mesmeric gathering of kindred souls intent on telling a story through the medium of music. Vision Éternel had a hand in this story, and offered the piece titled "Start from the Beginning: The Accident", which is the opening sequence for the second act, 'A Rehabilitation, An Incredible Journey'. Seek here.

The mastermind behind Vision Éternel also unveiled to us a rare and laconic video interview, in which he answers some queries of fans. Featured at the end of the interview is a brand new unheard VE track, as of yet still shrouded in mystery..

He also very kindly answered some questions I inquired of him:
What are the origins of Vision Éternel?
Vision Éternel formed in January 2007 almost by pure experimentation accident. I discovered the power of reverb in the middle of a depression caused by a breakup, and right away took to recording exactly what I felt in late moments of those January nights. At first it wasn't anything I planned on continuing with as it was hidden in my many "visions" (a.k.a. solo projects part of Triskalyon), but when I started working on new material after the fall of the circle, I knew it was something serious.
What provides the inspiration behind the music you compose for this project?
All inspirations are directly related to a mood at the moment of the recording. In most cases I record VE songs when I'm in a post-relationship phase. So all influences are directly inspired by my loneliness and hope for affection.
In terms of musical equipment and gear, what would you say you enjoy using most?
My gear for VE is pretty basic, and I must conclude that it's because I haven't played shows for this band and have not needed to expand what I currently have. On almost every single VE recording I have used my Jackson Kelly, with a DiMarzio X2N humbucker pickup (which I originally picked up for playing thrashened black metal in Throne of Mortality). I use the Boss Digital Reverb pedal as well as various reverb/delay presets on the computer. I'd have to say that lately, what I'm having fun with a bit in my EBow, which is being used more and more on VE recordings.
For physical releases of your albums, what is your preferred medium? Is there any vinyl release on the horizon?
I love vinyls. I hope that something of VE can be released on vinyl someday, but who knows. I think it will be up to Abridged Pause Recordings ;)
How has living in Montréal affected your artistic side? Do you reside in the downtown area?
When I started VE I was actually still living at my parents house in New Jersey, though I had spent the previous 6 months in Montréal. I moved back to Montréal in the summer of 2007. I wouldn't say that living here has made any difference in the evolution of the music. I think that simply has to do with the fact of living on my own. Often ending up completely isolated in my apartment. I currently do not live downtown, though I have in the past, and plan on going back next summer. The north shore on the island is pretty boring haha.
How do you go about the recording process? Is it more or less an independent endeavor?
All recordings take place at Mortified Studios (a.k.a. my computer, Jenny, yes I name all my personal belongings). I'd say that everything VE does in the studio is pretty DIY.
What's the ambient/post-rock scene like in Québec?
I believe in "Love the music, hate the fans", so I don't go to shows much. But I do know that we have a great post-rock scene. There's a post-rock show at least every other day, in the important smaller venues. We also have a lot of post-rock and ambient labels right here; Alien8, Cyclic Law, Where Are My, Constellation, etc.
Why did you decide to remaster the music video of Love within Narcosis?
The original music video was filmed on a beat up JVC DV camcorder that my family had bought at least five or six years prior to the shooting. At the time I found it, the first EP was almost ready to be released, and I decided I wanted to make something extra for this band. So I went outside in the cold dusk of February, and I started taking pictures for the album cover, this was with a digital photo camera my dad had. I liked the mood of the lantern and setting sun a lot, especially since I was able to incorporate a bit of the bitter cold outside (even if this was in New Jersey). The next day I got the camcorder and attempted to recreate a similar feeling on video.

That night when I went on my computer to edit the video out, it was one of my first times using Adobe Premiere, so what came out was pretty choppy. As well, my monitor was dying out and the resolution was really, really dark. So the final product was a lot brighter than intended. The gamma was all out of whack. But of course I wasn't aware of it just yet. Later that evening I added it to YouTube, which was still pretty new back then, and the widescreen format wasn't an option back then, and I must have messed up something in the encoding because when the video was uploaded, it looked horrible, in quality, in frame and in resolution. But it was my first video and decided it was acceptable.

It was about a year later that I saw once again the same video on YouTube on my friends MacBook, and I realized just how bad it looked. The entire mood was off, and people just weren't getting the right vibe from it. From that point on I always told myself that I would rework it some day, when it would possibly get released on DVD. Now, almost four years after the making the video, I was working on the video interview (posted above), and I was struck by the desire to fix this whole thing it. It was the perfect moment to get people to rewatch the video. So that's what I did.
As far as the future is concerned, what are your plans for Vision Éternel as time moves forward?
Potential 4th EP, but nothing is sure....

Yes, listen to Faith No More!
Check out VE here, at the home of Abridged Pause Recordings.
To further satiate your palate, explore these fine selections.