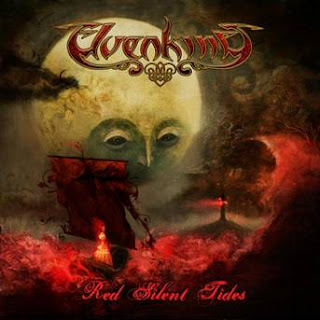 The first three releases of Italy’s Elvenking are excellent. I noticed, however, a leaning toward accessibility on The Winter Wake in keeping with the period’s power metal trend of “finding the right melodies” and being altogether “heavier.” Though somewhat more straightforward than Wyrd I felt the album was a success and I looked forward to their next move. What seems to have happened, however, is one of folk metal’s most underrated bands gave up on their choice to follow a nearby path to the equally underappreciated Skyclad and attempted to blaze a new trail copying the least interesting elements of Children of Bodom (also a popular thing for European power metal bands to do at the time). The result was a lot of eye shadow, darker themes, and the album The Scythe. To this day I have little interest in that album in comparison to their other material. It is also difficult to feel the mood of dark themes about suicide et cetera from a band called Elvenking.
In general the bands that chose to mime Children of Bodom did a fine job drawing influence from the music of the first three classic albums while simultaneously aping Bodom’s ridiculous subject matter and image. My complaint with Elvenking’s attempts at it was the apparent loss of most of the actual folk elements. After The Scythe, they went on to record an acoustic album, that seems to have fallen under everyone’s radar but which I am still eager to hear, entitled Two Tragedy Poets ...And a Caravan of Weird Figures. I hoped, then, they had returned to their original springs of inspiration and would put out another album as good as Heathenreel or Wyrd, but I was to be sorely disappointed by what came next.
Genre blending is very much encouraged, but Elvenking cannot seem to decide if they are a folk metal band, a power metal band, a gothic metal band or a radio rock band. All of these things could work in theory, but between promotional images of them rocking out on stage like a popular metal band and dressing like mystical forest men it is difficult to grasp which rhetorical situation they are setting up. Their newest album, Red Silent Tides is a prime example of just how confusing things can get. The new album is not terrible; Elvenking did a fine job crafting the songs and performing them with passion and skill, they simply made an album that annoys me.
It is the trademark of Red Silent Tides that a single song can be lame and awesome at the same time. “Dawnmelting” opens the album with promising strength that quickly dissolves with the Bon Jovi-esque first half of “The Last Hour.” The latter track kicks into gear (in a very nice early-Bodom way) at about two minutes and forty seconds, making me wonder how they managed it so successfully. At this point it’s clear that I just do not like the hair metal components of the song (and I do in fact like some hair metal, so it is not necessarily prejudice on my part), but this is to be the pattern for the rest of the album. Something about the way the majority of the album shifts between radio rock and seriously cool riffs and melodies while trying to convince me it is a soul searching record just does not feel genuine. Tracks like “Silence De Mort” and “Runereader” are pretty excellent most of the time, but are offset by irritating ones like “Possession” and “Those Days.” Somewhere along the way, it seems, Elvenking stopped writing thoughtful lyrics and started writing breakup songs.
The majority of the strength of Red Silent Tides is in those moments in certain songs that are simply awesome. The choir part in “Runereader” and the synths and catchy fiddle-driven melodies of “The Cabal” (unfortunately countered by a chorus fit for a ditzy teen soap opera montage) are what I would not mind hearing more of from Elvenking; but they are sewn into a quilt comprised of some very faded patches.
I might wake up tomorrow and decide the redeeming moments are enough to make me like this album, or I might continue to be annoyed by the way it excites and disappoints me at regular intervals. The first half is inconsistent and the second provides little to recommend itself. At the moment I’m enjoying the cover art most of all. What Elvenking has done on this album is reminiscent of power metal icon Tobias Sammet’s decisions to load 80’s pop rock into his music. Those who loved the early material of Edguy and Avantasia but found the later material lackluster will understand this connection when they hear Elvenking’s newest offering. Kudos for trying something new, though, I suppose.

Official Elvenking Site
Posted by The Inarguable at 8:19 PM