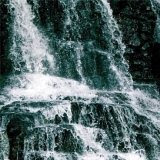 An epic from start to finish, this album flew under manytheproverbialradar, but is without a doubt the profound documentation of music as journey- a study in the juxtaposition of sound and the human soul. All poetic banter aside, very rarely does one find a record that is clear evidence of a shift in the musical paradigm. Years after the now nearly impossible to find, trance-inducing, metal-as-spiritual-vehicle 'Desolate North', the mysterious Tanner Anderson resurfaces with a stirring realization of nature as instrument, epic swells of guitars and fleeting but tortured howls, all encased in the elements: Washes of guitar mirror washes of water, the space between the notes are tantamount to the notes themselves. For those willing to step out of drone hipsterdom and ride the next wave of wow.

Brevity is key: if SunnO))) and Agalloch had a child that grew up listening to classic Kranky Records releases, you might be scratching the surface of this record that has been the soundtrack of my year. Those that gave 'Souls At Zero' the cold shoulder back in 1999 and have since recanted their sin, may appreciate this chance at redemption. Get this record.

2. Locrian- “The Crystal World” [Utech]
Dark, post-???, and experimental without the slightest bit of pretension.

4. Salem- “King Night” [IAMSOUND]
Silly genre name aside, the blown out textures and hooks are undeniable.

5. Deathspell Omega- “Paracletus” [Season Of Mist]
Oops, they did it again...

6. The Human Quena Orchestra- “A Natural History Of Failure” [Utech]
The darkest record I have ever heard.

7. Agalloch- “Marrow Of The Spirit” [Profound Lore]
The perfect balance of all territory previously explored by these pioneers.

9. Daughters- “S/T” [Hydra Head]
Has anyone seen my face? It seems to have melted upon hearing this record.

10. Horseback- “The Invisible Mountain (Reissue)” [Utech/Relapse]
There is a reason this record is on so many lists, despite it originally
coming out in 2009.

Honorable Mentions: once again Menace Ruine blows my mind, Killing Joke's return was exciting, Xasthur ended with his finest work to date, and thanks to Jon for recommending Wolvserpent's 'Blood Seed'