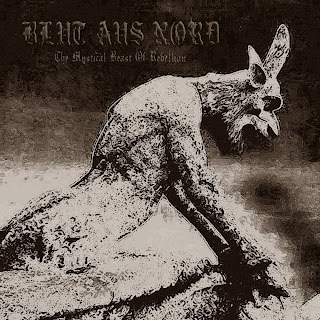 Before being handed Blut Aus Nord’s re-release of their acclaimed 2001 album The Mystical Beast of Rebellion I had no previous experience with the band’s music. I had heard the name and seen the CDs available, but had not yet listened. For me, the newer French scene (Alcest, Peste Noire etc.) is where my interest lies in regards to the music of that particular scene. The Mystical Beast of Rebellion has, for whatever reason, been chosen as a rerelease via Debemur Morti Productions with a supplementary second disc containing three tracks that comprise the seventh chapter of “The Fall” (chapters one through six comprising the track list of the original album) and new cover art.
Blut Aus Nord’s style on the original album (first disc) is good minimalist atmospheric black metal akin to Transylvanian Hunger era Darkthrone. The production lends itself well to the spirit being sought for the album and I rather enjoy its warm, sludgy fuzziness. The wall-of-sound achieved on this album is not done so much by layering as by production and allowing the guitars to breath noisily. The vocals have an eerie, lo-fi quality and are often set back in the mix while the music generally shifts between atonal dissonance and eerie, accessible melodies balanced by heavier Cletic Frost style riffing. A good example of the more dissonant elements is “Chapter III” with its tenseness and concluding metallic soundscape while “Chapter IV” gets a bit more melodic. “Chapter V” has some nice Hellhammer/early Celtic Frost style guitar bends and showcases some of the band’s heavier sensibilities.
In all, the original tracks of The Mystical Beast of Rebellion do a nice job keeping things interesting and flowing from start to finish, but I imagine most readers are more interested in what I have to say about the new supplemental material. The new tracks (all three parts of “Chapter VII”) bring something new to the table. Rather than rehashing the atmo-black feel of the original, Blut Aus Nord enters the realm of blackened doom where those elements of melody and weighty Celtic Frost inspired riffs come to the fore. Perhaps my favorite track of the entire package is the second of the new additions with its more accessible melody that has me seeing Doré engravings or Blake illuminations (as anything called “The Fall” probably should). I also enjoy the way the vocals sound like they are coming out of one of Dante’s levels of Hell (a clichéd description in black metal, but in this case they really do sound that way; kudos to the band). One of Blut Aus Nord’s strengths on this release is seeing the potential in making sparse vocals into an instrument of their own via interesting production. The final track, a nineteen minute crusher begins to lag a bit (proving that size isn’t everything), though the general ideas remain strong throughout.
I find that I enjoy this album, at least in the new presentation (as it is my first impression), but I don’t quite get what the big deal over it is. People seem to love it and Blut Aus Nord, but I can’t say it stands out as a very important atmospheric black metal release to me. I’m interested in listening to it again, and that is a good sign; it means something is calling me back to it, and that means I may come to really love it. At the moment, however, I find Blut Aus Nord’s stamp of blending of atonal and eerie music intriguing and commendable, and I am interested in hearing more of their albums, but I certainly was not floored by The Mystical Beast of Rebellion. This is one of those moments where I can only suggest listeners check it out for themselves. If you’re like me and you like atmo-black metal but have heard so much that it takes something special to make a release stand out, this is still worth the time, but it’s not necessarily spectacular. Otherwise, if you want visions of Pandæmonium and general Miltonic madness, you’re probably safe to stick with Emperor and the other greats.

-Bryan A. Wysopal
Posted by The Inarguable at 9:14 AM