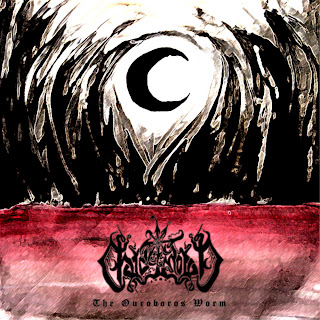 The newest offering by America’s Chaos Moon, The Ouroboros Worm EP, is an interesting attempt at a sort of “progressive” style of black metal with hints of Blut Aus Nord’s discord and the ever popular “post” elements of the day. There is competence in all of the compositions on this recording, however, it must be said straightaway that the majority of the vocals are inferior to the music and do it little justice. Particularly, the clean vocals are troublesome. At times they can sound chaotic and frightening, though more often they sound off-key and almost comical in their attempts to appear “tortured.” Truly the effect is similar to the experience of listening to Tom G. Warrior’s stomach-ache-vocals on Celtic Frost’s classic Into the Pandemonium. Neither do the blackened vocals add much of anything to the music (though the lower growls are quite well done when layered with higher ones). There is a sense of wandering in the way the vocals are handled that is common to many DIY bands (I know I have been, and in many ways still am, fretting with that myself). Unfortunately it is problematic enough to be addressed right away.

The vocals are certainly not Chaos Moon’s strong suit, but the music itself features several moments that will call the listener back for seconds. How memorable these tracks are will be a matter of personal taste, but there is clearly some understanding of musicality evident; at times what Chaos Moon is capable of is truly impressive. A variety of moods are accounted for throughout the course of this EP placing it a cut above the typical buzz-saw bedroom black metal so often marketed as “atmospheric.” Everything from discord to pleasant harmony, technical skill to effective simplicity, is here in this compact presentation.

Perhaps my favorite tracks of all are the truly well done intro and outro, “The Worm Ouroboros,” (Head) and (Tail), respectively. These ambient tracks display true competence in exploiting different synth textures and playing with simple yet emotive melodic ideas. Both carry a more “accessible” and less dissonant feel than the metal tracks which can make them seem out of place but also add to the aforementioned scope of feelings. In many cases the “ambient” tracks on metal releases are skipped over (sacrilege, usually!) and perhaps stupidity here because those of The Ouroboros Worm are truly enjoyable.

The Ouroboros is an exciting symbol that I personally have always found fascinating, so I was drawn to this recording based on the concept before I had any experience with the actual music. Whatever it is Chaos Moon is doing with the idea, though, I cannot really say. There does not seem to be any connection between the title and the pleasing Ouroboros-themed artwork to any of the music besides the first and last tracks on the EP. It is an interesting idea to play with the “full circle” symbolism of the Ouroboros by tying the EP together with two similar tracks of the same name, however. The remaining tracks seem to be feeling around near something thematically interesting but mostly the lyrics seem stock.

In brief, Chaos Moon’s The Ouroboros Worm is certainly worth looking into for anyone interested in a more technical and speedy variety of atmospheric black metal. It is not completely perfect and it features a few glaring botch marks, mostly in the form of weird vocals, though it is otherwise interesting and enjoyable. For those unfamiliar with the band, this EP is a fine place to start as the material, though different in many ways, owns up to the standards of earlier releases. The vocals seem stranger and less well handled here perhaps because they are attempting to be a bit more complex than is generally the case with Chaos Moon. Still, here is a decent place to begin looking into a worthwhile USBM band.

-Bryan A. Wysopal
Posted by The Inarguable at 10:20 PM