Evangelist - "Oracle of Infinite Despair" (2011) [You should sign these guys] 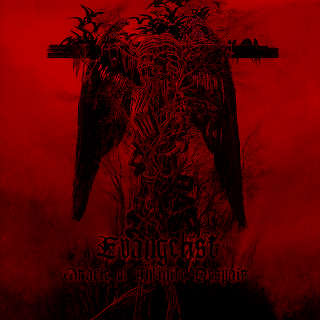 It's not very often that an album gives me the creeps.

A lot of death metal today, while brutal, really lacks in the hellish atmospheres of its forefathers. Remember the first time you listened to "Onwards to Golgotha" and about shit your pants? Sure, there's been a resurgence of "eerie", "ancient" death metal nowadays with Teitanblood, Portal, Dead Congregation and a handful of others, but overall the genre's really lost its original, creepy appeal, instead handing it off to black metal (which, in the past few years, has concentrated way too much on being pretty).

Well, remember Matron Thorn of Benighted in Sodom? It turns out that, with the help of his live bassist (and a close friend of mine) Ascaris, he's been making some of the creepiest fucking death metal I've heard in years.

Masses, meet Evangelist, whose EP "Oracle of Infinite Despair" is a view into your worst nightmares. Dissonant, chaotic, plodding, and brutal, we see an extremely heavy side of M. Thorn's psyche that not even I could have foreseen.

If you can, imagine if Blut aus Nord's album "MoRT" (hint hint, drum machines) was performed by Incantation, but there was a keyboard player who was having a bad acid trip and Craig Pillard's canonical brutal vocals were even lower. Everything is sludgy and disgusting, much like the cover art above. What's not to like about a decaying, crucified angel?

My one complaint about this EP is that it is so damn short. 16 minutes isn't enough to really whet my pallet, you know? Get cracking, Thorn and Ascaris!

PS) These guys aren't signed. Change that, please.
Posted by The Inarguable at 5:10 PM