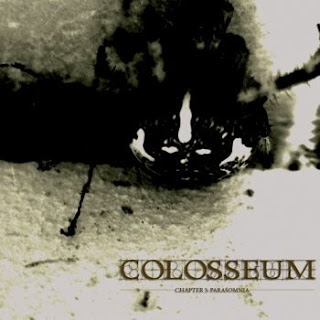 Welp, this is my inaugural Inarguable review (that's a tongue twister if I ever read one) and I decided to tackle this monster of a funeral doom masterpiece, Colosseum's latest (and sadly, probably last) offering. "Chapter 3: Parasomnia," in my eyes, is easily the strongest release in the funeral doom world so far this year.

Kicking off with the beautiful "Dilapidation and Death," the atmosphere created in the beastly opening riff doesn't waver for a second throughout the track's 20+ minute duration. The interplay of the keys and riffs have always been Colosseum's strong point and it's showcased perfectly here. Hell, the last half of the track is drenched in so much sincere, epic melancholy I damn near started weeping right then and there. Juhani Palomäki and Olli Haaranen take tried and true funeral doom riffing and flair it up a bit with some great variations that shine through the gloom like little beacons of frail hope only to be drowned in the thunder of Colosseum's roaring onslaught. Very tasteful use of the keys to highlight the riffing while simutaneously adding a heaping layer of etheral atmosphere to everything.  This song climbed to the top of the heap as one of my favorite songs of the genre within it's first listen. It's a doozy and if it doesn't leave you feeling genuinely depressed, you just might in fact be of the robotic persuasion. It alone is reason to check this release out.

With the first song's ringing death knell, the listener is given a moment to climb out of the grave and get a little air for a few minutes with "Questioning Existence." A winding, disorienting instrumental, it's a bit of a "throw away" track in relation to the weightiness of the rest of the release but it's gorgeous in it's own right and props the listener back up for the next leviathan of a song coming their way.

"Passage To Eternity" roars out of the gate with Palomäki's signature bellow. Thundering, droning bass and HUGE tom hits continue throughout, ushering in that all too familiar sepulchural organ to carry away the souls of each and every one of us. Becoming strangely triumphant halfway through before sinking back into the mire of desperation, this track just might be the epitome of  a song reaching a truely dreadful sense of  hopelessness. Abandon all hope ye who have made it this far.

"On The Strand of Nightmares" is a bit more of an up-beat beast. Now, I know what you're saying. "Nate, I get bored with a funeral doom album after the first couple songs. What makes you think I'm still listening this far in?" Well, my dear ADHD afflicted friend, it's because Colosseum hold the keys to writing successfully engaging funeral doom. In a genre so hell-bent on slower than molasses in a wheel-chair tempos, the trick is varying things up to keep it sounding "fresh" (in as deathly a sense of the word as possible.) Within this song, Colosseum incorporate some nice swaying, mid-tempo rhythms and elegant bends into their strings and even some sparse clean chants to liven things up a bit. The keys take a bit more of a front seat here too but not in an annoying way, moreso in a "cinematic" tone.

And finally, as if you weren't feeling bereft of all hope and any feeling this side of sunny yet, "Parasomnia" ends things in a ghostly, cryptic fashion. Meandering with clean chords and airy keys, it starts off dream-like enough. But much to peace's dismay, that all ends when the band lurches us back into plodding, crushing waves of doom. Doing the definition of the word "parasomnia" justice, the track becomes a real nightmare, almost feeling like it's coming unhinged as it progresses with the riffs truding along as the keys do their own epic swaying atop them, creating a bit of a disorienting effect. When the album draws to a close, the listener as experienced a true swansong. Not long after the writing and recording of the album, lead guitarist/vocalist/songwriter Juhani Palomäki tragically passed away. "Parasomnia" is not only the final masterpiece penned by one of the genre's most prolific groups but also by one of it's most beloved and gifted songwriters.