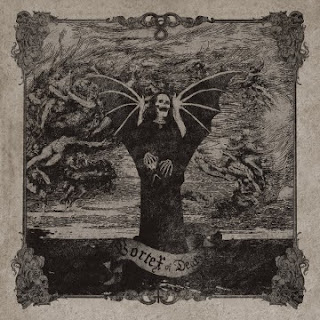 To begin, this bands name is a false friend: “hat” is Norwegian for “hate,” not a cognate for a thing you put on your head. It’s still a silly name for a band, though, especially at this stage in black metal’s existence. The Norwegian scene has been active for over twenty years now, so a name like “Hate” just looks like it belongs to a fourteen year old kid’s first “band” for which he draws “logos” in a notebook during biology class (and consequently misses any important information about genes that might save him from his half-baked opinions about the “Nordic race”).

I was skeptical but also intrigued upon receiving Hat’s newest full length, Vortex of Death, to review; but the artwork and packaging is really quite catching, and since the band doesn’t have an extensive discography consisting of splits and demos over the last few years, I decided to retain some of my initial optimism going in.

And behold! Despite the semi-silly name and the questionable originality of the decision to use “death” as a driving theme for an orthodox satanic black metal album, Vortex of Death really does stand on its own.

This album features, among other things, excellent use of soundclips including some from someone who just might be Sam Elliott (the Stranger from the Big Lebowski) in the first track. It sounds funny—and it is—but it’s also awesome.  The clips are processed and made to sound truly demonic throughout the song and placed with excellent taste. In other songs the soundclips are less original, focusing on torture and pain etc., but the places where they really add something make up for those moments.

Other things that Hat does well on this album include keys and “effects” that are also very well placed and which add something compositionally to the songs they are used in, and a mixture of catchy and melodic, almost “epic,” riffing. By the end Vortex of Death gets a little same-y, but it’s strong enough to warrant several listens through, and it stands up well after a few listens, too.

This album really is a good example of Norwegian black metal. Plenty of catchiness; plenty of satanic atmosphere—misanthropic and anti-life indeed. You can nod your head to this and it’s still grim, just like the best of the classic Norwegian scene.


Listen to Hat
Posted by The Inarguable at 6:49 PM