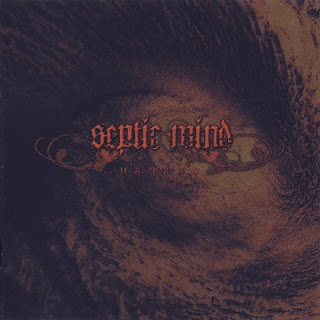 Начало or "The Beginning" in its translation. This being their monstrous debut
album and by monstrous I mean it is so DOOM it hurts. This album features 3 atmosphere traditional like Funeral doom songs with some fast parts at least on the drums, trippy soundscapes, and some retro to melodic guitar solos.

The opening of the title track Начало or "The Beginning" has a old school doom intro with its clean guitar swimming around in the reverb, Chorus and flanger effects while the beat of the drums  pound a long for about 6 minutes.
The heavy parts have a more Doom Death Metal type of feel to them but adding these ambient soundscapes along side ambient guitar clean tones and distorted ambient guitar leads.

The second track Уводящий or "The Misleading" has a long intro of drone ambient sounds, ambient distortions, and just over all weird sounds. Upon till it reaches a more musical part with its clean guitar patterns and ambient lead over the top with the drums in a never changing pattern that follows along with the clean guitars. It is only in the last remains 5 something minutes of the track that the more metal parts come into play. At first I thought this going to be mostly a old sounding like track with its long intro and looping clean verses, But was proven wrong in the last 5 minutes of the track.

The third and final song Покинувшие Мир or "The Ones Who Left This World". Upon playing this track DOOM can only be said this is the heaviest track out of the 3 songs. Super slow verse with strange sci-fi sound effects playing through out the verse that will trick thoughts 60s, and 70s space movies. Then out of no where this is this psychedelic ambient part that is shocking brings out a lot of hopeless and negative like emotions. Only to jump right back into the crushing doom and within this heavy part there is a old school blast beat that carries on for a good couple of minutes of the song only to have the last remaining minutes of the track with millions of weird sounds and heavy breathing.

Over all this was a very good release and had many crushing parts at least on the first and final tracks. I think more could have been done and I think a lot of  creativity is lacking in the second track but over all give it a listen.